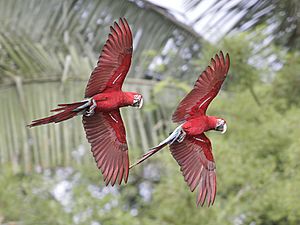 A macaw is a New World parrot. Some of the species are large birds, the largest of the parrots. Macaws are native to Mexico, Central America, South America, and formerly the Caribbean.

Macaws, like all parrots, are unusually intelligent birds. The usual thing for parrots is to pair for life. They stay together even out of the mating season. They often fly in formation, one above the other. 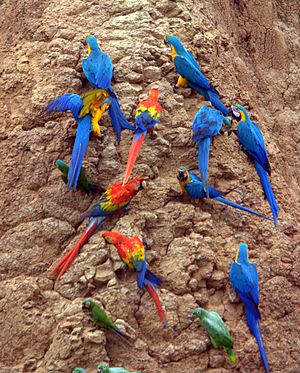 Macaws and mealy amazons at a clay lick in Tambopata National Reserve, Peru 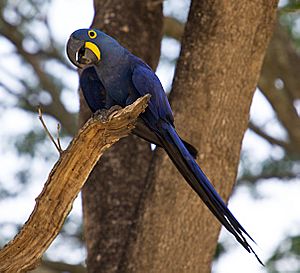 Macaws eat a variety of foods including seeds, nuts, fruits, palm fruits, leaves, flowers, and stems. Wild species may forage widely, over 100 km (62 mi) for some of the larger species such as Ara araurana (blue & yellow macaw) and Ara ambigua (great green macaw), in search of seasonally available foods.

In the western Amazon, hundreds of macaws and other parrots descend to exposed river banks to lick clay almost daily, – except on rainy days.

It was suggested that parrots and macaws in the Amazon basin eat clay from exposed river banks to neutralize toxins.

The clay eating behavior of parrots was studied at clay licks in Peru. Apparently, macaws and other birds and animals prefer clays with higher levels of salt. Sodium is a vital element which is scarce in environments over 100 kilometers from the ocean.

All content from Kiddle encyclopedia articles (including the article images and facts) can be freely used under Attribution-ShareAlike license, unless stated otherwise. Cite this article:
Macaw Facts for Kids. Kiddle Encyclopedia.