The scarlet macaw (Ara macao) is a large red, yellow, and blue Central and South American parrot, a member of a large group of Neotropical parrots called macaws. It is native to humid evergreen forests of tropical Central and South America. Range extends from south-eastern Mexico to the Peruvian Amazon, Colombia, Bolivia, Venezuela and Brazil in lowlands of 500 m (1,640 ft) (at least formerly) up to 1,000 m (3,281 ft). In some areas, it has suffered local extinction because of habitat destruction or capture for the parrot trade, but in other areas it remains fairly common. Formerly it ranged north to southern Tamaulipas. It can still be found on the island of Coiba. It is the national bird of Honduras. Like its relative the blue-and-yellow macaw, scarlet macaws are popular birds in aviculture as a result of their striking plumage.

It is about 81 centimeters (32 in) long, of which more than half is the pointed, graduated tail typical of all macaws, though the scarlet macaw has a larger percentage of tail than the other large macaws. The average weight is about 1 kilogram (2.2 lb). The plumage is mostly scarlet, but the rump and tail-covert feathers are light blue, the greater upper wing coverts are yellow, the upper sides of the flight feathers of the wings are dark blue as are the ends of the tail feathers, and the undersides of the wing and tail flight feathers are dark red with metallic gold iridescence. Some individuals may have green in the wings. 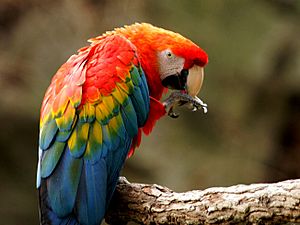 At Fort Worth Zoo

There is bare white skin around the eye and from there to the bill. Tiny white feathers are contained on the face patch. The upper mandible is mostly pale horn in color and the lower is black. Juveniles have dark eyes; adults have light yellow eyes.

It is frequently confused with the slightly larger green-winged macaw, which has more distinct red lines in the face and no yellow in the wing.

The scarlet macaw can live up to 75 or even 90 years in captivity, although a more typical lifespan is 40 to 50 years.

In May 2013 it was announced that a team of scientists, led by Dr. Christopher M. Seabury and Dr. Ian Tizard of Texas A&M University had sequenced the complete genome of the scarlet macaw.

A typical sighting is of a single bird or a pair flying above the forest canopy, though in some areas flocks can be seen. They may gather at clay licks. Scarlet macaws communicate primarily through raucous honks; however, vocal communication is highly variable, and captive macaws are known to be adept mimics of human speech. 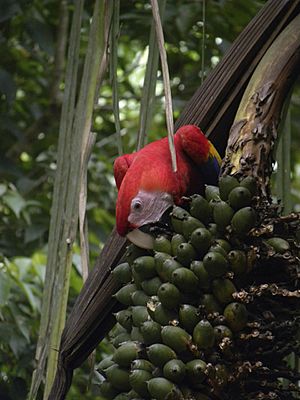 Scarlet macaws eat mostly fruits, nuts and seeds, including large, hard seeds and sodium packed dirt. They also love to eat insects and larvae.They are seen feeding heavily on bugs, snails and foliage. Snails and bugs are great source of protein, as they need additional protein during breeding seasons. They also add flowers and nectar to their diet as a supplement

While comparatively docile at most times of the year, scarlet macaws may be formidably aggressive during periods of breeding. Scarlet macaws are monogamous birds, with individuals remaining with one partner throughout their lives. The hen lays two or three white eggs in a tree cavity. The female incubates the eggs for about five weeks, and the chicks fledge from the nest about 90 days after hatching. and leave their parents about a year later. Juveniles reach sexual maturity at five years of age.

The South American range is extensive and covers the Amazon basin; extending to Peru east of the Andes, to Bolivia. In Bolivia, it is very present in the Aquicuana Reserve, located in the Beni Department, near the city of Riberalta, the Capital of the Bolivian Amazon. 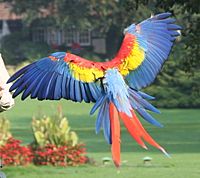 In Central America, the range extends from extreme eastern and southern Mexico and Panama through Guatemala and Belize, the island of Coiba and infrequently on the mainland of Panama, and in Costa Rica in isolated regions on the Pacific Coast; the Nicoya Peninsula the Carara National Park and Peninsula de Osa.

The scarlet macaw has escaped or been deliberately released in to Florida, but there is no evidence that the population is breeding and may only persist due to continuing releases or escapes.

All content from Kiddle encyclopedia articles (including the article images and facts) can be freely used under Attribution-ShareAlike license, unless stated otherwise. Cite this article:
Scarlet macaw Facts for Kids. Kiddle Encyclopedia.