ZooTampa traces its origins to a small animal exhibit that was located on the grounds of the University of Tampa in downtown. It moved to its current location as the Lowry Park Zoo in 1957, and was completely rebuilt and reconfigured in 1989. The zoo rebranded itself as ZooTampa at Lowry Park in 2018 as part of another renovation and expansion project.

Nearly 1 million people visit the 65-acre zoo a year to see its more than 1,300 animals.

Tampa's first zoo was a small collection of exotic animals in Plant Park on the grounds of the University of Tampa across the Hillsborough River from downtown.

During the middle 1950s, Mayor Nick Nuccio led the push to move the zoo to a more spacious location. Land further up the river near the neighborhood of Seminole Heights was chosen. The park was created in 1925 and christened Lowry Park for Sumter de Leon Lowry Sr., a Tampa city commissioner and civic leader who was also active in the Sons of Confederate Veterans. Lowry's son, Sumter de Leon Lowry Jr., later made significant contributions to improve the park, including donating money to construct a bandstand and paying the purchase price for an elephant which he then donated to the zoo. 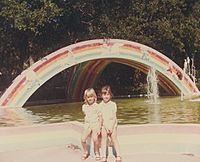 Lowry Park Zoo opened in 1957. The zoo shared the park with Fairyland, where concrete statues depicting fairy tales and nursery rhymes were along a winding maze of paths beneath the limbs of sprawling oak trees. This whimsical area was accessible via a large rainbow bridge.

As the wildlife collection grew, other attractions and rides were also added. By the early 1980s, the zoo featured a small roller coaster, a skyride, and a kid-sized train, among other kiddie rides. However, the zoo facilities were in need of repair and renovation, with the animals cramped concrete quarters so poor that the Humane Society called it "one of the worst zoos in America".

After several years of fundraising and with the help and support of mayor Bob Martinez and the city of Tampa, the original Lowry Park Zoo closed on September 7, 1987 for a $20 million reconstruction in which nearly all traces of the original zoo (including Fairyland) were removed and replaced with more modern facilities. The first phase of the revamped zoo opened on March 5, 1988. Several additions and expansions since then have brought the zoo to its current configuration.

In March 2018, Joseph Couceiro, the zoo's CEO, introduced a new logo and signage. Formerly Lowry Park Zoo, the name was changed to ZooTampa at Lowry Park to emphasize not only its connections to Tampa and the region, but the progress the area is undergoing as well. Over the next 10 years, Couceiro wants to continue to expand and redesign several zoo features.

One of the zoos oldest sections, the Asian Domain, was renovated and renamed the Asian Gardens in 2007. Exhibits there include Indian rhinoceros, Malayan tigers, babirusa, Komodo dragon, clouded leopards, anoas, sun bears, Malayan tapirs, and an Indonesian-themed aviary. The pagoda-like design is subtle but noticeable, giving an authentic Asian feel.

It also includes a manatee education show, an aquatic center with sharks, eels, seahorses, and a wide collection of snakes, including eastern diamondback rattlesnakes, copperheads, and eastern coral snakes. A Discovery Center highlights the amphibian residents of the zoo, showcasing various species of frogs, toads and other creatures.

The primate section of the zoo is possibly the best designed portion of the zoo, with every exhibit seemingly being connected by a running system of rocky waterfalls and waterways that stretch across the entire section. There is an array of great apes in the siamang gibbons, chimpanzees and Bornean orangutans that swing and hoot around their exhibits. There is also a wide array of other primates, including Angolan black-and-white colobus monkeys, golden lion tamarins, ring-tailed lemurs and mandrills.

The Wallaroo Station Children's Zoo re-opened on February 27, 2015 after its first renovation since opening in 2002. It is home to an array of Australian-native species including koalas, yellow-footed rock wallabies, Australian singing dogs and emus, along with a varying collection of cockatoo parrots, and flying fox bats.

This section of the zoo is home to an interactive bat habitat, a "Flying Bananas" ride, a budgie encounter and a family rollercoaster. It also has splash play area for younger kids titled "The Billabong".

The latest addition to Lowry, providing a completely authentic African experience. Shaded by acacia trees, the area is home to a safari tram ride that provides an in-depth look behind the scenes of the zoo. Martial eagles and Patas monkeys are visible only by this ride. This exhibit is home to many landmark African species, including meerkats, duikers, Reticulated giraffes, zebras, African bush elephants, East African crowned cranes, African penguins and southern white rhinoceroses.

The Ituri Forest, a later addition to the Safari Africa section, brought in the concept of a washed-out African river bank. The area includes a wide array of species, including greater flamingos, pygmy hippopotamuses, saddle-billed storks and shoebill storks.

In mid-to late 2014, the warthog exhibit was closed down and renovated to house Aldabra tortoises and juvenile Galapagos giant tortoises, who were previously behind-the-scenes exclusive animals.

The main free-flight aviary, accessible nearly at the entrance, is almost hidden in overgrown brush and plants, giving the feel of a wild experience. Inside, the whole area is covered head-to-toe in free-flight birds and waterfowl, including great hornbills, red-legged seriemas, toco toucans, boat-billed herons, African openbill storks, scarlet ibises, white-faced whistling ducks, guineafowl, Raggiana Birds-of-paradise and an array of ducks and tanagers. Every so often, if you hang around, you can observe two-toed sloths lazily hanging in the trees.

Spirits of the Sky Raptor Show

This show, held twice a day at the Zooventures Theater, is a fun and interactive experience that provides kids and adults alike with fun facts of birds of prey and what we can do to protect them. Some of the exhibited species include the Eurasian eagle-owl, the bald eagle and the Andean condor.

The zoo hosts a hospital for Florida manatees in which injured animals are rehabilitated with the intent of returning them to the wild. It is the only non-profit hospital in the world specifically dedicated to critical care for injured, sick and orphaned wild manatees. The zoo works in partnership with the U.S. Fish and Wildlife Service and the Florida Fish and Wildlife Conservation Commission to rescue, rehabilitate and release Florida’s endangered manatees. In 2012, Tampa’s Lowry Park Zoo was honored with a “Significant Achievement in North American Conservation Award” for its work with manatees, presented by the Association of Zoos and Aquariums (AZA).

Roaring Springs, which opened in June 2018, is a shoot the chute ride manufactured by WhiteWater West. The ride features a single three-story drop that splashes riders and onlookers standing in the attraction's splash zone. Roaring Springs replaced the former log flume.

In 2006, one of the zoo's two Sumatran tigers, a 14-year-old female named Enshala, slipped through an unlocked gate and into an area undergoing renovation. The zoo director, Lex Salisbury, defended his decision to shoot and kill the animal after attempts to tranquilize the tiger failed and the animal lurched toward the animal doctor that had shot the tranquilizer dart.

All content from Kiddle encyclopedia articles (including the article images and facts) can be freely used under Attribution-ShareAlike license, unless stated otherwise. Cite this article:
ZooTampa at Lowry Park Facts for Kids. Kiddle Encyclopedia.