The Indian rhinoceros (Rhinoceros unicornis), also called the greater one-horned rhinoceros and great Indian rhinoceros, is a rhinoceros native to the Indian subcontinent. It is listed as Vulnerable on the IUCN Red List, as populations are fragmented and restricted to less than 20,000 km2 (7,700 sq mi). Moreover, the extent and quality of the rhino's most important habitat, alluvial grassland and riverine forest, is considered to be in decline due to human and livestock encroachment.

The Indian rhinoceros once ranged throughout the entire stretch of the Indo-Gangetic Plain, but excessive hunting and agricultural development reduced their range drastically to 11 sites in northern India and southern Nepal. In the early 1990s, between 1,870 and 1,895 rhinos were estimated to have been alive. In 2015, a total of 3,555 Indian rhinoceros are estimated to live in the wild. 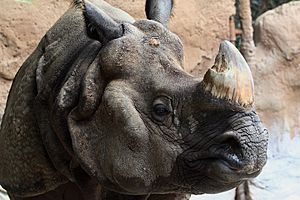 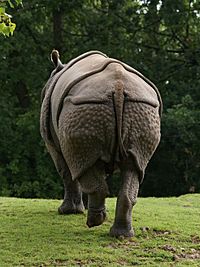 Wart-like bumps on the hind legs.

The Indian rhinoceros has a thick grey-brown skin with pinkish skin folds and a black horn. Its upper legs and shoulders are covered in wart-like bumps. It has very little body hair, aside from eyelashes, ear fringes and tail brush. Males have huge neck folds. Its skull is heavy with a basal length above 60 cm (24 in) and an occiput above 19 cm (7.5 in). Its nasal horn is slightly back-curved with a base of about 18.5 cm (7.3 in) by 12 cm (4.7 in) that rapidly narrows until a smooth, even stem part begins about 55 mm (2.2 in) above base. In captive animals, the horn is frequently worn down to a thick knob.

The rhino's single horn is present in both males and females, but not on newborn young. The black horn is pure keratin, like human fingernails, and starts to show after about six years. In most adults, the horn reaches a length of about 25 cm (9.8 in), but has been recorded up to 36 cm (14 in) in length and weight 3.051 kg (6.73 lb).

The rich presence of blood vessels underneath the tissues in folds gives it the pinkish colour. The folds in the skin increase the surface area and help in regulating the body temperature. The thick skin does not protect against bloodsucking Tabanus flies, leeches and ticks. The largest sized specimens range up to 4,000 kg (8,820 lb) 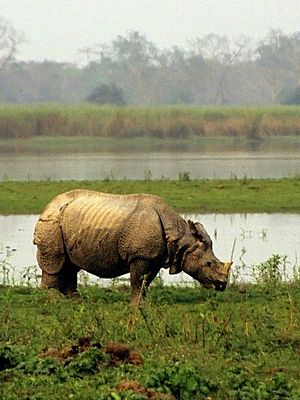 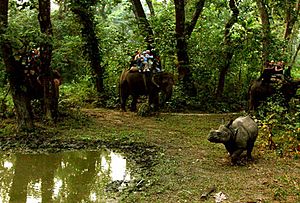 One-horned rhinos once ranged across the entire northern part of the Indian Subcontinent, today, their range has shrunk to a few pockets in southern Nepal, northern Bengal, and the Brahmaputra Valley. In the 1980s, rhinos were frequently seen in the narrow plain area of Royal Manas National Park in Bhutan. Today, they are restricted to habitats surrounded by human-dominated landscapes, so that they often occur in adjacent cultivated areas, pastures, and secondary forests. Rhinos are regionally extinct in Pakistan.

Adult male Indian rhinos are usually solitary. Groups consist of females with calves, or of up to six subadults. Such groups congregate at wallows and grazing areas. They are foremost active in early mornings, late afternoons and at night, but rest during hot days.

They are excellent swimmers and can run at speeds of up to 55 km/h (34 mph) for short periods. They have excellent senses of hearing and smell, but relatively poor eyesight. Over 10 distinct vocalisations have been recorded. Males have home ranges of around 2 to 8 km2 (0.77 to 3.09 sq mi) that overlap each other. 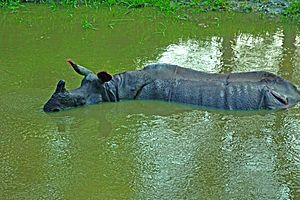 Indian rhinoceros in the water

Indian rhinos bathe regularly. The folds in their skin trap water and hold it even when they come back on land.

Indian rhinos have few natural enemies, except for tigers, which sometimes kill unguarded calves, but adult rhinos are less vulnerable due to their size. Mynahs and egrets both eat invertebrates from the rhino's skin and around its feet. Tabanus flies, a type of horse-fly, are known to bite rhinos. The rhinos are also vulnerable to diseases spread by parasites such as leeches, ticks, and nematodes. Anthrax and the blood-disease septicemia are known to occur. 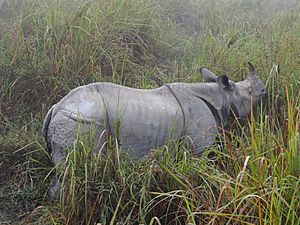 Indian rhinoceros are grazers. Their diets consist almost entirely of grasses, but they also eat leaves, branches of shrubs and trees, fruits, and submerged and floating aquatic plants.

They feed in the mornings and evenings. They use their lips to grasp grass stems, bend the stem down, bite off the top, and then eat the grass. They tackle very tall grasses or saplings by walking over the plant, with legs on both sides and using the weight of their bodies to push the end of the plant down to the level of the mouth. Mothers also use this technique to make food edible for their calves. 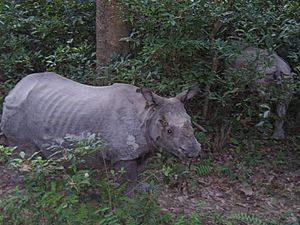 Two Indian rhinoceroses in Nepal. Their horns have been removed

The Indian rhinoceros forms a variety of social groupings. Adult males are generally solitary, except for mating and fighting. Adult females are largely solitary when they are without calves. Mothers will stay close to their calves for up to four years after their birth, sometimes allowing an older calf to continue to accompany her once a newborn calf arrives.

Subadult males and females form consistent groupings, as well. Groups of two or three young males will often form on the edge of the home ranges of dominant males, presumably for protection in numbers. Young females are slightly less social than the males. Indian rhinos also form short-term groupings, particularly at forest wallows during the monsoon season and in grasslands during March and April. Groups of up to 10 rhinos may gather in wallows—typically a dominant male with females and calves, but no subadult males.

The Indian rhinoceros makes a wide variety of vocalisations. At least 10 distinct vocalisations have been identified: snorting, honking, bleating, roaring, squeak-panting, moo-grunting, shrieking, groaning, rumbling and humphing. In addition to noises, the rhino uses olfactory communication. Adult males urinate backwards, as far as 3–4 m behind them, often in response to being disturbed by observers. 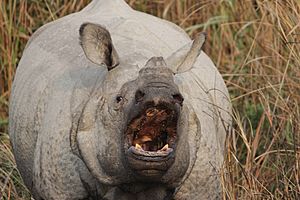 In aggregations, Indian rhinos are often friendly. They will often greet each other by waving or bobbing their heads, mounting flanks, nuzzling noses, or licking. Rhinos will playfully spar, run around, and play with twigs in their mouths. Adult males are the primary instigators in fights. Fights between dominant males are the most common cause of rhino mortality, and males are also very aggressive toward females during courtship. Males will chase females over long distances and even attack them face-to-face. Unlike African rhinos, the Indian rhino fights with its incisors, rather than its horns.

All content from Kiddle encyclopedia articles (including the article images and facts) can be freely used under Attribution-ShareAlike license, unless stated otherwise. Cite this article:
Indian rhinoceros Facts for Kids. Kiddle Encyclopedia.