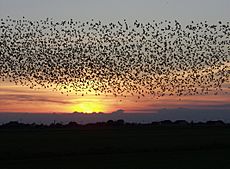 Starling flock at sunset in Denmark

The Starlings are a family of small to medium-sized birds, the Sturnidae. This family are passerine songbirds, whose best-known species is Sternus vulgaris, the common starling.

Starlings occur naturally in the Old World, from Europe, Asia and Africa, to northern Australia and the islands of the tropical Pacific. Several European and Asian species have been introduced to these areas as well as to North America, Hawaii and New Zealand. In these new areas they compete for habitat with native birds, and are invasive species.

Starlings have strong feet, their flight is strong and direct, and they are very gregarious (social). Their preferred habitat is fairly open country, and they eat insects and fruit. Several species live around humans, and are effectively omnivores. Many species search for food by opening the bill after probing it into dense vegetation; this behavior is called 'open-bill probing'. Plumage is usually dark with a metallic sheen and white flecks (spots). Most species nest in holes, laying blue or white eggs.

Many Asian species, particularly the larger ones, are called mynas, and many African species are known as glossy starlings because of their iridescent plumage.

Starlings have varied and complex songs, and may copy sounds from their surroundings, including car alarms, and human speech. The birds can recognize particular individuals by their calls.

North-East European starlings migrate, but in southern and western Europe the birds are resident. Starlings are generally a highly social family. Most species associate in flocks of varying sizes throughout the year. These flocks may include other species of starlings and sometimes species from other families. This sociality is obvious in their roosting behaviour. In the non-breeding season some roosts can number thousands of birds. Flocks in Britain used to number millions of birds, though numbers are now fewer than they used to be.

Sternus vulgaris is a highly gregarious species in autumn and winter. Flock size is variable: huge flocks are a spectacular sight and sound. These flocks often attract birds of prey such as sparrowhawks. Flocks form a tight sphere-like formation in flight, frequently expanding and contracting and changing shape, seemingly without any leader.

Very large roosts, sometimes up to 1.5 million birds, can form in city centres, woodlands, or reedbeds, causing problems with their droppings. Huge flocks of more than a million starlings are observed just before sunset in spring in southwestern Jutland, Denmark. There they gather in March until they leave for their breeding ranges by mid-April. Their flocking creates complex shapes against the sky, a phenomenon known locally as "Black Sun". To witness this spectacle, the best place are the seaward marshlands of Tønder and Esbjerg .

Flocks of anything from five to fifty thousand starlings form in areas of the UK just before sundown during mid winter. These flocks are commonly called a Starling Moot. 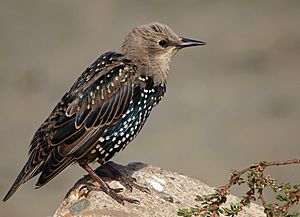 A juvenile from a large flock in California, USA.

Although there are approximately 200 million starlings in North America, they are all descendants of 60 birds released in 1890 (and 40 more in 1891) in Central Park, New York, by Eugene Schieffelin. He was a member of the Acclimation Society of North America, which tried to introduce to North America every bird species mentioned in the works of William Shakespeare.

As an introduced species, European starlings are not protected under the Migratory Bird Treaty Act. Starlings are considered a nuisance species in North America. The birds, which travel in enormous flocks, often pose dangers to air travel, disrupt cattle operations, chase off native birds, and roost on city blocks. They leave behind corrosive droppings and hundreds of millions of dollars of damage every year. In 2008, U.S. government agents poisoned, shot and trapped 1.7 million starlings, more than any other nuisance species.

The starlings are generally a highly social family. Most species associate in flocks of varying sizes throughout the year. A murmuration describes both the flocking of starlings, as well as their consequentially large flight formations. These flocks may include other species of starlings and sometimes species from other families. This sociality is particularly evident in their roosting behaviour; in the non-breeding season some roosts can number in the thousands of birds.

Starlings imitate a variety of avian species and have a repertoire of about 15–20 distinct imitations. They also imitate a few sounds other than those of wild birds. The calls of abundant species or calls that are simple in frequency structure and show little amplitude modulation are preferentially imitated. There are local dialects of mimicked sounds. 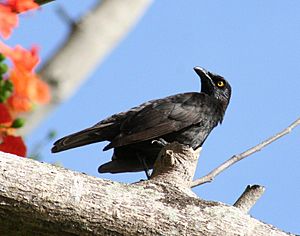 Micronesian starlings have been observed feeding on the eggs of seabirds

The diets of the starlings are usually dominated by fruits and insects. Many species are important dispersers of seeds in continents Asia and Africa, for example white sandalwood, Indian Banyan. In addition to trees they are also important dispersers of parasitic mistletoes. In South Africa, the red-winged starling is an important disperser of the introduced Acacia cyclops. Starlings have been observed feeding on fermenting over-ripe fruit, which led to the speculation that they might become intoxicated by the alcohol. Laboratory experiments on European starlings have found that they have disposal enzymes that allow them to break down alcohol very quickly. In addition to consuming fruits, many starlings will also consume nectar. The extent to which starlings are important pollinators is unknown, but at least some are, such as the slender-billed starling of alpine East Africa, which pollinates giant lobelias.

All content from Kiddle encyclopedia articles (including the article images and facts) can be freely used under Attribution-ShareAlike license, unless stated otherwise. Cite this article:
Starling Facts for Kids. Kiddle Encyclopedia.