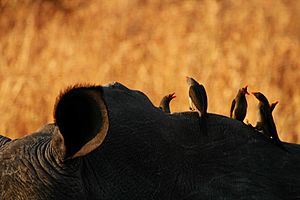 Redbilled Oxpeckers on a Rhinoceros 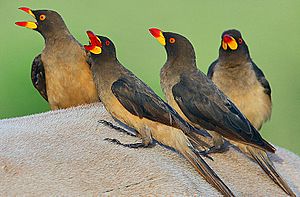 Yellow-billed Oxpeckers on an Ass

The oxpeckers are the two species of bird which make up the family Buphagidae.

Oxpeckers are endemic to the savanna of Sub-Saharan Africa. Their names come from their habit of perching on large mammals (both wild and domesticated) such as cattle or rhinoceroses, and eating ticks, botfly larvae, and other parasites.

According to the more recent studies of phylogeny, the oxpeckers are an ancient line related to the Mimidae (mockingbirds, thrashers &c.) and starlings, but not particularly close to either.

Considering the known biogeography (distribution) of these groups, the most plausible explanation seems that the oxpecker lineage originated in Eastern or Southeastern Asia like the other two. This would make the two species of Buphagus something like living fossils.

Oxpeckers feed exclusively on the backs of large mammals. Certain species seem preferred, whereas others, like the Lichtenstein's hartebeest or topi are generally avoided. The smallest regularly used species is the impala, probably because of the heavy tick load and social nature of that species. In many parts of their range they now feed on cattle, but avoid camels. They feed on ectoparasites, particularly ticks, as well as insects infecting wounds and the flesh and blood of some wounds as well.

Oxpecker/mammal interactions are the subject of some debate and ongoing research. They were originally thought to be an example of mutualism, but recent evidence suggests that oxpeckers may be parasites instead. Oxpeckers do eat ticks, but often the ticks that have already fed on the ungulate host and there has been no proven statistically significant link between oxpecker presence and reduced ectoparasite load . However one study of impalas found that impalas which were used by oxpeckers spent less time grooming themselves suggesting they had fewer parasites. Oxpeckers have been seen opening new wounds and worsening existing ones in order to drink the blood of their perches . Oxpeckers also feed on the earwax and dandruffs of mammals, although less is known about the benefits of this to the mammal, it is suspected that this is also a parasitic behaviour. Some oxpecker hosts are intolerant of their presence. Elephants and some antelope will actively dislodge the oxpeckers when they land. Other species tolerate oxpeckers while they search for ticks on the face, what one author described as "appear[ing] ... to be an uncomfortable and invasive process."

The Swahili language word for oxpecker is "Askari wa kifaru," which means "the rhino's guard" in English. A team of scientists from California State University and Victoria University in Australia wondered if oxpeckers really did help guard the rhinos. They found that the black rhinoceros listens for the noises the oxpecker makes. Rhinoceros cannot see well but oxpeckers can. When an oxpeckers sees a human, it makes a noise. It does not make this noise at any other time. The rhinos hear this noise and then either look for the human or run away. The scientists performed an experiment: A human would slowly walk toward a rhino. Rhinos without oxpeckers on their backs only noticed the human one out of five times, but rhinos with oxpeckers noticed the human every time and from much further away. The scientists wondered if bringing flocks of oxpeckers to groups of rhinoceros without them would help the rhinos avoid human hunters.

All content from Kiddle encyclopedia articles (including the article images and facts) can be freely used under Attribution-ShareAlike license, unless stated otherwise. Cite this article:
Oxpecker Facts for Kids. Kiddle Encyclopedia.