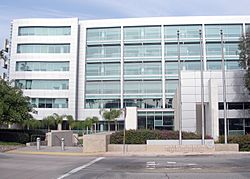 Office of the CSU Chancellor in Long Beach.

The CSU system is composed of 23 campuses and has over 417,000 students supported by 47,000 faculties and staff. It is the largest senior system of higher education in the United States.

CSU prepares about 60 percent of the teachers in the state, 40 percent of the engineering graduates, and more graduates in business, agriculture, communication studies, health, education and public administration than all other California universities and colleges combined. Altogether, about half the bachelor's degrees and a third of the master's degrees awarded annually in California are from the CSU.

Since 1961, nearly 2.5 million alumni have received a bachelor's, master's or doctoral degree from the CSU system which offers more than 1,800 degree programs in 240 subject areas.

The California State University has 23 colleges. They are listed in order from oldest to newest.

All content from Kiddle encyclopedia articles (including the article images and facts) can be freely used under Attribution-ShareAlike license, unless stated otherwise. Cite this article:
California State University Facts for Kids. Kiddle Encyclopedia.