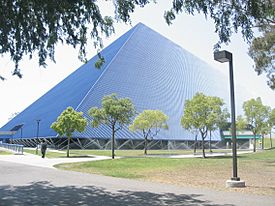 The Walter Pyramid, the University's most prominent sporting complex and most recognizable landmark.

CSULB has been recognized repeatedly as one of "America's Best Value Colleges" by the Princeton Review. More than 30 factors are considered to rate the colleges in four categories: academics, tuition GPA (the sticker price minus average amount students receive in gift aid scholarships and grants), financial aid (how well colleges meet students' financial need) and student borrowing.

Long Beach State has also been ranked as one of the top five public master's degree-granting institutions in the West by U.S. News & World Report's "America's Best Colleges Guide". It is also home to the largest publicly funded art school west of the Mississippi. The university currently operates with one of the lowest student fees in the country at US $4,370 per year for full-time students having California residence.

The school's sports teams are known as the Long Beach State 49ers; the baseball team is also known as the Dirtbags. Most 49ers teams play in the Big West Conference.

All content from Kiddle encyclopedia articles (including the article images and facts) can be freely used under Attribution-ShareAlike license, unless stated otherwise. Cite this article:
California State University, Long Beach Facts for Kids. Kiddle Encyclopedia.