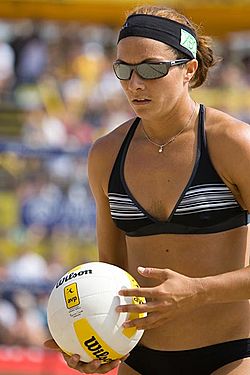 Misty May-Treanor during a tournament in 2007

Misty May-Treanor plays as an attacker and a defender in Volleyball. Her partner Kerri Walsh is a "master blocker". She had earned 1.6 million dollars by having 89 victories by the end of 2007.

In 2004 Misty May married Matt Treanor the catcher for the Florida Marlins. She has two kids. She attended California State University Long Beach, California.

All content from Kiddle encyclopedia articles (including the article images and facts) can be freely used under Attribution-ShareAlike license, unless stated otherwise. Cite this article:
Misty May-Treanor Facts for Kids. Kiddle Encyclopedia.