The Santa Monica Pier is a large double-jointed pier at the foot of Colorado Avenue in Santa Monica, California, United States. It contains a small amusement park, concession stands, and areas for views and fishing.

Not to be confused with Pacific Ocean Park, a former amusement park a few miles south which operated from 1958 to 1967 and has been demolished.

The pier contains Pacific Park, a family amusement park with its solar panelled Ferris wheel. The brightly lit wheel can be seen from a distance and has been turned off during the Earth Hour observance.

It also has an original carousel hippodrome from the 1920s, the Santa Monica Pier Aquarium operated by Heal the Bay, shops, entertainers, a video arcade, a trapeze school, pubs, and restaurants. The pier's west end is a popular location for anglers.

The pier is a venue for outdoor concerts, movies, and other activities. 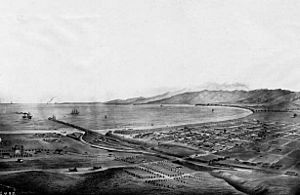 Sketch of Santa Monica and the Pier, 1875 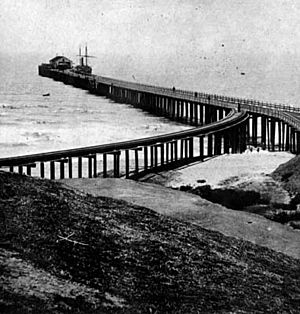 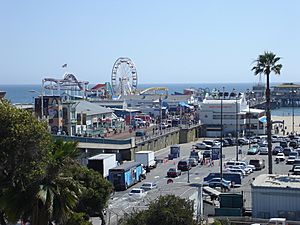 The pier with Pacific Park on the left, 2006 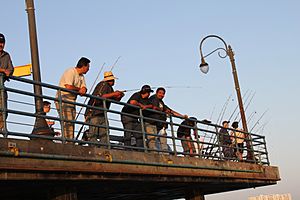 Anglers on the Santa Monica Pier, 2009 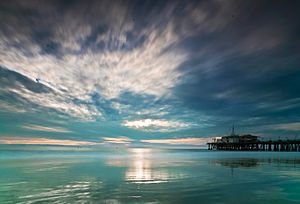 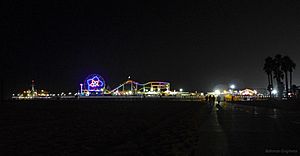 View of the pier and Pacific Park from the beach at night, 2012 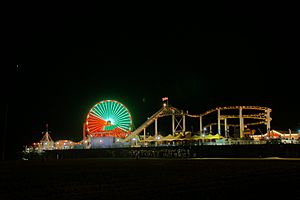 The Ferris wheel and roller coaster lights at night, 2009 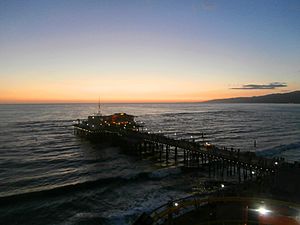 View of the Municipal Pier from the ferris wheel, 2013

Santa Monica has had several piers; however, the current Santa Monica Pier is made up of two adjoining piers that long had separate owners. The long, narrow Municipal Pier opened September 9, 1909, primarily to carry sewer pipes beyond the breakers, and had no amenities. The short, wide adjoining Pleasure Pier to the south, a.k.a. Newcomb Pier, was built in 1916 by Charles I. D. Looff and his son Arthur, amusement park pioneers. Attractions on the Pleasure Pier eventually included the Santa Monica Looff Hippodrome building (which now houses the current carousel and is listed on the National Register of Historic Places), the Blue Streak Racer wooden roller coaster (which was purchased from the defunct Wonderland amusement park in San Diego), the Whip, merry-go-rounds, Wurlitzer organs, and a funhouse.

The Philadelphia Toboggan Company built the Carousel, PTC #62, in 1922. It features 44 hand-carved horses. It was rebuilt in 1990 inside the Hippodrome. A calliope provides musical accompaniment.

The La Monica Ballroom opened on July 23, 1924. Designed by T.H. Eslick with a Spanish façade and French Renaissance interior, it was the largest dance hall on the west coast, accommodating 5,000 dancers on its 15,000-square-foot (1,400 m2) hard maple floor. Country music star Spade Cooley began broadcasting his weekly television show from the ballroom in 1948, where the program remained until 1954. In the summer of 1955, the Hollywood Autocade opened at the La Monica with one-hundred famous and unusual cars, including Jack Benny's Maxwell and a Rumpler Drop Car. From 1958 until 1962, the ballroom served as a roller skating rink; first as Skater's Ballroom, and later as the Santa Monica Roller Rink, where the speed skating club won many state and regional championships. The La Monica Ballroom was demolished in 1963.

The Pleasure Pier thrived during the 1920s but faded during the Great Depression. During the 1930s, most of the amusement park facilities were closed down and its attractions sold off. A breakwater was built in 1934 that provided docking for up to 100 fishing and pleasure boats near the pier.

The bridge and entry gate to Santa Monica Pier were built in 1938 by the federal Works Project Administration, and replaced the former grade connection.

The Newcomb Pier was privately owned until it was acquired by the city in 1974. During the 1960s and 1970s various plans were proposed that would entail removal of the pier. The most extensive included the construction of an artificial island with a 1500-room hotel. It was approved by the City Council, but citizens formed "Save Santa Monica Bay" to preserve the pier. The order to raze the pier was revoked by the city council in 1973. Within that same year, the Carousel and Hippodrome were sets for the film The Sting.

Storms swept away the protective breakwater in 1982. During storms in early 1983, the pier experienced a significant loss. On January 27, there were reported swells of 10-feet during this winter storm. When the storm was over, the lower deck of the pier was destroyed. The City of Santa Monica began repairs on March 1, 1983, when another storm rolled in. A crane which was being used to repair the west end was dragged into the water and acted as a battering ram against the pilings. Over one-third of the Pier was destroyed.

On June 18, 2009, the California Office of Environmental Health Hazard Assessment issued a safe eating advisory for any fish caught from Santa Monica Pier to Ventura Harbor due to elevated levels of mercury and PCBs.

All content from Kiddle encyclopedia articles (including the article images and facts) can be freely used under Attribution-ShareAlike license, unless stated otherwise. Cite this article:
Santa Monica Pier Facts for Kids. Kiddle Encyclopedia.