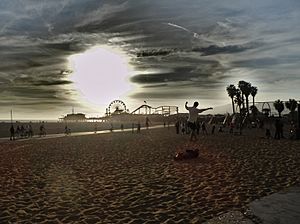 Original Muscle Beach in the front, Santa Monica Pier in the back

Muscle Beach refers to the exclusive Santa Monica location of the birthplace of the physical fitness boom in the United States during the 20th century, started in 1934 with predominantly gymnastics activities on the south side of the Santa Monica Pier. Muscle Beach Venice is the contemporary title of the outdoor weightlifting platform constructed in Venice, California, a distinct neighborhood in the city of Los Angeles, 18 years after Muscle Beach was established.

Muscle Beach Venice was officially titled in 1987 by the City of Los Angeles with the distinguishing name "Venice" added to the location to honor the original Santa Monica site. The contemporary Muscle Beach Venice is located two blocks north of Venice Boulevard on Ocean Front Walk in Venice, California.

Santa Monica's "Muscle Beach" landmark derives its name from the growing local and national reputation of gymnastics and strength athletes who congregated at what was first known simply as the "Santa Monica Beach Playground", with the 'muscle' term gaining momentum by 1940. The 1940 opening of the first of an eventual nationwide chain of weightlifting gyms by famed pioneer gym chain operator, Vic Tanny, only two city blocks from Muscle Beach in Santa Monica, is commonly considered a key contributor to the increasing attraction of bodybuilders and strength lifters to Muscle Beach from across the nation.

By the 1950s, Muscle Beach established worldwide fame and helped to popularize and bring legitimacy to physical culture with acrobatics and bodybuilding and contribute to a nationwide health and fitness movement continuing into the 21st century.

Muscle Beach dates back to the 1930s when the Works Progress Administration (WPA) installed exercise equipment immediately south of the Santa Monica Pier in Santa Monica, California. Popular gymnastic and acrobatic exhibitions were routinely held there on city-provided equipment. A platform on the beach with weight lifting equipment provided a workout area for such famous bodybuilders as Vic Tanny, Jack LaLanne, and Joe Gold. Muscle House was a "crashpad" just off the beach where many bodybuilders would live for cheap rent and convenient access to the beach. It was a common waypoint for bodybuilders such as Chet Yorton, Steve Reeves, Vince Edwards, Jack Delinger, George Eiferman, and Dave Draper.

The site of Muscle Beach Venice has inherited the modern fame and attention that was initially generated by Muscle Beach in Santa Monica, as the tumbling platform from this earlier facility had been removed by the City of Santa Monica due to difficulties in the day-to-day maintenance and supervision of the original Muscle Beach site in 1959. In the early 1960s, however, the iconic exercise rings were still in place on the beach and the original regulars of Muscle Beach in Santa Monica continued to congregate at the world-famous setting with an emphasis on gymnastics events, acrobatics and adagio training and performances. 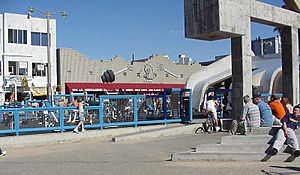 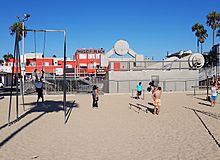 After the closing of the original Muscle Beach, bodybuilding attention shifted south to the somewhat lesser-known Venice Beach Weight Pen, operated by the Los Angeles Recreation and Parks Department. A small spartan weight pen was built near Windward Avenue in 1952, later replaced by the large current facility (33°59′08″N 118°28′21″W﻿ / ﻿33.9854557°N 118.4725901°W﻿ / 33.9854557; -118.4725901) during a complete renovation and Muscle Beach Venice redevelopment effort in 1990, which sports a huge concrete barbell on the roof and bleachers for spectators.

Today it is an open playground with a gated area that encloses weightlifting equipment. The second area is a sand box with gymnastic, rope climbing, and acrobatic bars. 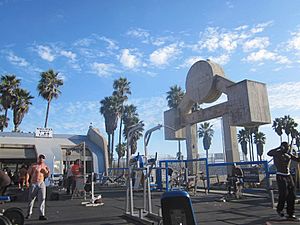 By extension, Muscle Beach Venice refers also to a high concentration of weightlifting and fitness businesses in the area. Dave Draper, Larry Scott, Arnold Schwarzenegger, Danny Trejo, and Crips cofounder Stanley Tookie Williams used to be regulars, among many famous bodybuilders and actors who have trained there. Chet Yorton trained at Muscle Beach Venice in the early to mid-1960s to prepare for his victory over Arnold Schwarzenegger in the 1966 NABBA Mr. Universe contest.

All content from Kiddle encyclopedia articles (including the article images and facts) can be freely used under Attribution-ShareAlike license, unless stated otherwise. Cite this article:
Muscle Beach Facts for Kids. Kiddle Encyclopedia.