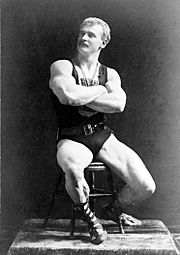 A strongman Eugen Sandow, the "Father of modern bodybuilding".

Bodybuilding is an activity where people build big muscles. It is a form of human body modification which uses intensive muscle hypertrophy.

An individual who engages in this activity is referred to as a bodybuilder. In competitive bodybuilding, bodybuilders display their physiques to a panel of judges, who assign points based on their appearance.

The muscles are revealed through a process known as the "cutting phase" - a combination of fat loss, oils, and tanning which, combined with the lighting, make the definition of the muscle group more distinct.

Some people do bodybuilding full-time as a career choice. Bodybuilders train their body and then they pose when the competition starts. Bodybuilders do not show their power or strength. They only show their muscular body. It is important to have every muscle build up. The person with the best muscles and pose will win the contest. When Bodybuilders train they use very complex diet and training systems that will help them to achieve best results. Some popular bodybuilders that were taking part in competitions include Arnold Schwarzenegger and Charles Atlas.

All content from Kiddle encyclopedia articles (including the article images and facts) can be freely used under Attribution-ShareAlike license, unless stated otherwise. Cite this article:
Bodybuilding Facts for Kids. Kiddle Encyclopedia.