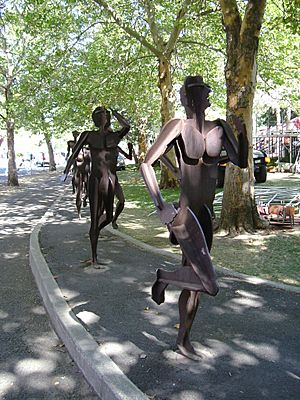 Jogging is a form of trotting or running at a slow or leisurely pace. The main intention is to increase physical fitness with less stress on the body than from faster running, or to maintain a steady speed for longer periods of time. Performed over long distances, it is a form of aerobic endurance training.

Jogging is a very cheap way of keeping fit. One can jog anywhere, although it is good to stay away from main roads where the air is full of traffic fumes. It is also good to avoid too much jogging on hard pavements (sidewalks). A softer surface such as grass is better for because there is less hard jolting for the knees. 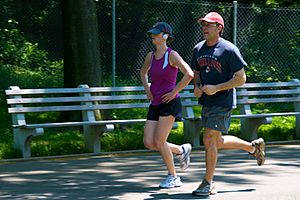 Jogging and running have very popular in the past 30 years. People of all ages jog along the sidewalk. A good effect of this form of exercise is its strength. It promotes good condition more quickly than other options for people who want to control their weight.

Jogging can be used as a method to increase endurance or to provide a means of cardiovascular exercise but with less stress on joints or demand on the circulatory system. 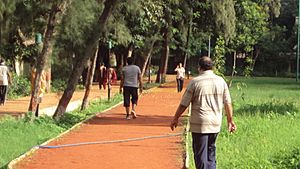 Jogging can be anywhere such as in the park

According to a study by Stanford University School of Medicine, jogging is effective in increasing human lifespan, and decreasing the effects of aging, with benefits for the cardiovascular system. Jogging is useful for fighting obesity and staying healthy.

The National Cancer Institute has performed studies that suggest jogging and other types of aerobic exercise can reduce the risk of lung, colon, breast and prostate cancers, among others. It is suggested by the American Cancer Society that jogging for at least 30 minutes five days a week can help in cancer prevention. 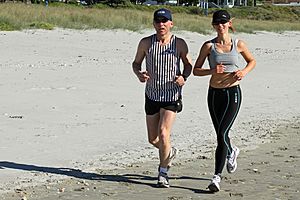 Jogging is a cheap and effective form of exercise

While jogging on a treadmill will provide health benefits such as cancer prevention, and aid in weight loss, a study published in BMC Public Health reports that jogging outdoors can have the additional benefits of increased energy and concentration. Jogging outdoors is a better way to improve energy levels and advance mood than using a treadmill at the gym. 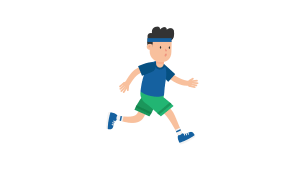 All content from Kiddle encyclopedia articles (including the article images and facts) can be freely used under Attribution-ShareAlike license, unless stated otherwise. Cite this article:
Jogging Facts for Kids. Kiddle Encyclopedia.