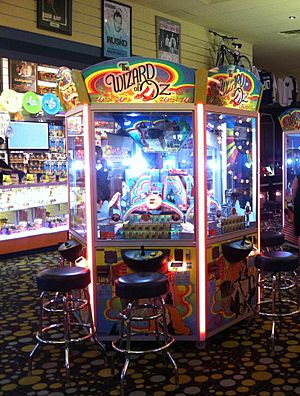 A Wizard of Oz game in an arcade

An amusement arcade (also called a video arcade or just arcade) is a place where people play arcade games such as video games, pinball machines, and slot machines.

Videos were introduced in amusement arcades in the late 1970s. These were most popular during the early 1980s. Arcades became popular with young people. Many video arcades began closing in the late 1990s, as the technology of home video game consoles began to rival and eventually exceed that of arcade games. However, video arcades remained popular in Japan, where they are called game centers.

All content from Kiddle encyclopedia articles (including the article images and facts) can be freely used under Attribution-ShareAlike license, unless stated otherwise. Cite this article:
Amusement arcade Facts for Kids. Kiddle Encyclopedia.