It underwent a massive, three-year reconstruction process beginning in January 2008 and was re-opened as a modern outdoor shopping mall on August 6, 2010.

Santa Monica Place originally opened in 1980 at the apex of Santa Monica's Third Street Promenade, developed jointly by The Rouse Company and The Hahn Company. Originally anchored by J. W. Robinson's and The Broadway, it featured 120 shops & restaurants and a food court, spanning three levels. Notably, Santa Monica Place was one of the first works of architect Frank Gehry and his first shopping mall, after being rejected from designing The Mall in Columbia, early in his professional career with Gruen Associates.

Macerich purchased Santa Monica Place from Rouse in 1999, and rumors of major changes to the then-flailing shopping center were reported. In 2004, the company proposed tearing down the mall and replacing it with a 10-acre (40,000 m2) complex of high-rise condos, shops and offices. The plan met with strong opposition from local residents who felt the project did not meet the low-rise character of the neighborhood and would worsen traffic. In a second 2007 proposal, Macerich significantly scaled back its plans, which was received as positive by the public, and was passed.

The $250 million project removed the mall's roof and gutted the interior, replacing it with two levels of retail shops and a third level food court. At the same time, Kevin Kennon Architects converted the original Macy's into a Bloomingdale's. While the Steve & Barry's, formerly Robinsons-May was replaced with a Nordstrom. Dallas-based Omniplan served as the executive architects in association with The Jerde Partnership who served as the design architects. The grand reopening occurred on August 6, 2010. The architect for the redesign was Jon Jerde. It was his last major work before he died.

On January 6, 2021, Macy's announced that Bloomingdale's would be closing in April 2021 as part of a plan to close 46 stores nationwide.

The LACMTA E Line terminus station is located across the street from Bloomingdales. In addition, many Santa Monica Big Blue Bus routes serve the mall. 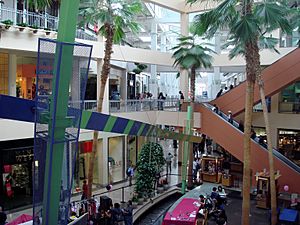 All content from Kiddle encyclopedia articles (including the article images and facts) can be freely used under Attribution-ShareAlike license, unless stated otherwise. Cite this article:
Santa Monica Place Facts for Kids. Kiddle Encyclopedia.