Its most famous resident was Richard Nixon, who was born there, although his father moved the family away before Yorba Linda incorporated. The Richard Nixon Presidential Library and Museum is in Yorba Linda.

This area was the home of the Luiseño, Tongva, and Juaneño Indians at one time.

In 1834, Jose Antonio Yorba's most successful son, Bernardo Yorba (after whom the city would later be named), was granted the 13,328-acre (53.94 km2) Rancho Cañón de Santa Ana by Mexican governor José Figueroa. Most of this original land was retained after the Mexican–American war in 1848 by descendants of the Yorba family. A portion of the city's land is still owned and developed by descendants of Samuel Kraemer, who acquired it through his marriage to Angelina Yorba, the great-granddaughter of Bernardo Yorba. The site of the Bernardo Yorba Hacienda, referred to as the Don Bernardo Yorba Ranch House Site, is listed as a California Historical Landmark.

Near that same site sits the second oldest private cemetery in the county, the historic Yorba Cemetery. The land was given to the Roman Catholic Archdiocese of Los Angeles by Bernardo Yorba in 1858 since Orange County was not established out of Los Angeles County as a separate county until 1889. The cemetery closed in 1939 and was subsequently vandalized; however, in the 1960s, the Orange County Board of Supervisors took possession of the property to repair the damage, and tours are now available one day per month. 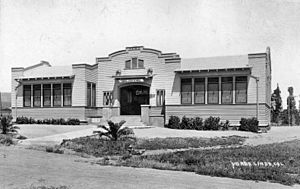 A section of the land was sold in 1907 to the Janss Investment Company, which first called the area Yorba Linda, and proceeded to subdivide the land and sell it for agriculture and manufacturing. In 1910, the agricultural aspect of that endeavor materialized, and the first of many lemon and orange groves were planted: at the time, the population was still less than 50. A year later, The Pacific Telephone & Telegraph Company began serving Yorba Linda, and the first school was constructed.

In 1912, several things happened in Yorba Linda: it received its first post office; the Yorba Linda Citrus Association was founded; the Southern California Edison Company began providing electricity; and the first church was constructed. The area that would later become downtown was also connected to Los Angeles by the Pacific Electric Railway in 1912, primarily for citrus transport. 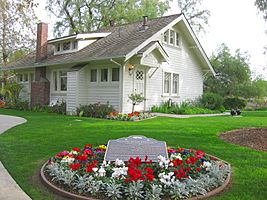 The Birthplace of Richard Nixon

In 1913, Richard Nixon was born in Yorba Linda, the chamber of commerce was set up, a library opened as part of the school, and avocado trees were first planted. A year later, a separate district was established for the library system.

In 1915, the Susanna Bixby Bryant Ranch house was constructed. It is now a museum and can be toured by the public.

In 1917, the Yorba Linda Star began publication. It has since become an online section of the OC Register. However, a printed version of just the Star still exists and is available at various city buildings free of charge and is delivered to every household in Yorba Linda each Thursday. Moreover, its past articles are available for viewing on microfilm at the Yorba Linda Public Library. In that same year, the first street was paved, Yorba Linda Boulevard.

The population exceeded 300 for the first time prior to 1920. In 1929, the citrus association's packing house burned down, as it was made of wood. It reopened the next year. During this period, the eastern two-thirds of Yorba Linda (east of the Yorba Linda Country Club) remained part of cattle ranches controlled by pioneer families such as the Yorba, de los Reyes, Kraemer, Travis, Dominguez, Friend, and Bryant ranches. 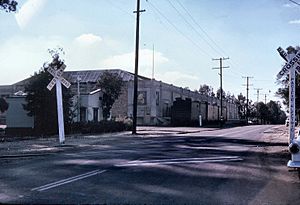 The Sunkist citrus packing house (later a 24 Hour Fitness gym) located on Yorba Linda Blvd in 1961. Soon after this was taken, Yorba Linda would transform from a rural community to a suburban one.

The small town had grown significantly by the 1960s, with more than 1,000 residents by the 1960 Census, and survived or fought off three annexation considerations or attempts: one by Brea in 1958 and one each by Anaheim and Placentia in 1963. These experiences culminated in incorporation, which occurred in 1967.

In 1990, the Birthplace of Richard Nixon opened as a public library and museum. It would later become a federal presidential library. In 1994, the community center opened.

In 2005, CNN ranked Yorba Linda 21st among the best places in the U.S. to live. In 2012, Yorba Linda was ranked 42nd on Money magazine's list of America's best small cities. Similarly, in an article by CNN Money, Yorba Linda was one of the richest U.S. cities and the richest in Orange County as reported by the Census data, showing a median household income of more than $120K: "Among towns of between 65,000 and 250,000 in population, Yorba Linda, California, where six-figure incomes are the rule, had the highest median income at $121,075". Yorba Linda has been identified as one of the richest cities in the U.S. by the U.S. Census Bureau, which shows a median household income of $121,075, higher than any other city in 2006.

In 2007, Yorba Linda High School broke ground after many years of planning.

In November 2008, eastern Yorba Linda suffered from fires that destroyed 113 homes and damaged 50 others. The destruction was due largely to erratic winds causing embers to fly up to half a mile away.

It has two ZIP codes, 92886 and 92887, approximately the western and eastern portions of the city, respectively. A third, 92885, also exists, exclusively for PO Boxes. The city is served by area codes 657 and 714 in a geographical overlay situation, in which 714 numbers were running out, so that 657 numbers are now also being issued in the same area. Eleven-digit dialing is therefore now required for local calls.

It is bordered by Anaheim on the south, Placentia on the west and southwest, Brea on the northwest, Chino Hills State Park on the north, and Corona on the east.

The two nearest seismic faults are the Whittier Fault and the Chino Fault, both of which are part of the Elsinore Fault Zone.

The city receives 14 to 15 inches of rain per year on average. The average temperatures in January and July are 55 and 71 degrees Fahrenheit, respectively, with the overall average for the year at 63. Humidity, likewise respectively, is 52%, 60%, and 56% on average.

There were 19,252 households out of which 44.8% had children under the age of 18 living with them, 72.3% were married couples living together, 8.3% had a female householder with no husband present, and 16.4% were non-families. 12.4% of all households were made up of individuals and 4.7% had someone living alone who was 65 years of age or older. The average household size was 3.05 and the average family size was 3.35.

All content from Kiddle encyclopedia articles (including the article images and facts) can be freely used under Attribution-ShareAlike license, unless stated otherwise. Cite this article:
Yorba Linda, California Facts for Kids. Kiddle Encyclopedia.