Anaheim was founded by fifty German families in 1857 and incorporated as the second city in Los Angeles County on March 18, 1876. The city remained largely a rural community until Disneyland opened in 1955. This led to the construction of several hotels and motels around the area, and residential districts in Anaheim soon followed. The city also developed into an industrial center, producing electronics, aircraft parts and canned fruit.

Anaheim's city limits extend from Cypress in the west to the Riverside County line in the east and encompass a diverse collection of neighborhoods and communities. Anaheim Hills is a master-planned community located in the city's eastern stretches that is home to many of the city's affluent. Downtown Anaheim has three mixed-use historic districts, the largest of which is the Anaheim Colony. The Anaheim Resort, a commercial district, includes Disneyland, Disney California Adventure, and numerous hotels and retail complexes. The Platinum Triangle, a neo-urban redevelopment district surrounding Angel Stadium, is planned to be populated with mixed-use streets and high-rises. Finally, Anaheim Canyon is an industrial district north of SR 91 and east of SR 57. 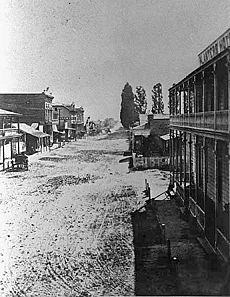 Anaheim's name is a blend of "Ana", after the nearby Santa Ana River, and heim, a common Germanic place name compound originally meaning "home".

The city of Anaheim was founded in 1857 by 50 German-Americans who were residents of San Francisco and whose families had originated in Rothenburg ob der Tauber, Franconia in Bavaria. parcel from Juan Pacifico Ontiveros' large Rancho San Juan Cajon de Santa Ana in present-day Orange County for $2 per acre.

For $750 a share, the group formed the Anaheim Vineyard Company. Their new community was named Annaheim, meaning "home by the Santa Anna River" in German. The name later was altered to Anaheim. To the Spanish-speaking neighbors, the settlement was known as Campo Alemán (English: German Field). 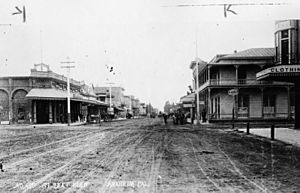 Although grape and wine-making was their primary objective, the majority of the 50 settlers were mechanics, carpenters and craftsmen with no experience in wine-making. The community set aside 40 acres (16 ha) for a town center and a school was the first building erected there. The first home was built in 1857, the Anaheim Gazette newspaper was established in 1870 and a hotel in 1871. For 25 years, the area was the largest wine producer in California. However, in 1884, a disease infected the grape vines and by the following year the entire industry was destroyed. Other crops – walnuts, lemons and oranges – soon filled the void. Fruits and vegetables had become viable cash crops when the Los Angeles – Orange County region was connected to the continental railroad network in 1887. 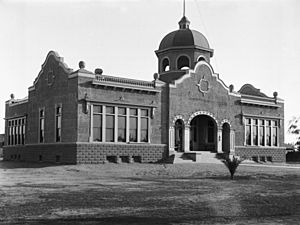 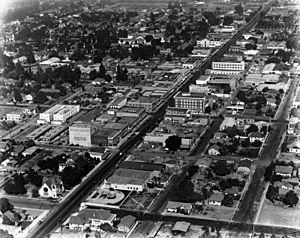 During the first half of the 20th century, before Disneyland opened its doors to the public, Anaheim was a massive rural community inhabited by orange groves and the landowners who farmed them. One of the landowners was Bennett Payne Baxter, who owned much land in northeast Anaheim that today is the location of Angel Stadium. He came up with many new ideas for irrigating orange groves and shared his ideas with other landowners. He was not only successful, he helped other landowners and businesspeople succeed as well. Ben Baxter and other landowners helped to make Anaheim a thriving rural community before Disneyland changed the city forever. Today, a street runs along Edison Park which is named Baxter Street. Also during this time, Rudolph Boysen served as Anaheim's first Park Superintendent from 1921 to 1950. Boysen created a hybrid berry which Walter Knott later named the boysenberry, after Rudy Boysen. Boysen Park in East Anaheim was also named after him.

In 1924, Ku Klux Klan members were elected to the Anaheim City Council on a platform of political reform. Up until that point, the city had been controlled by a long-standing business and civic elite that was mostly German American. Given their tradition of moderate social drinking, the German Americans did not strongly support prohibition laws of the day. The mayor himself was a former saloon keeper. Led by the minister of the First Christian Church, the Klan represented a rising group of politically oriented non-ethnic Germans who denounced the elite as corrupt, undemocratic, and self-serving. The Klansmen aimed to create what they saw as a model, orderly community, one in which prohibition against alcohol would be strictly enforced. At the time, the KKK had about 1200 members in Orange County. The economic and occupational profile of the pro and anti-Klan groups shows the two were similar and about equally prosperous. Klan members were Protestants, as were the majority of their opponents, however the opposition to the Klan also included many Catholic Germans. Individuals who joined the Klan had earlier demonstrated a much higher rate of voting and civic activism than did their opponents, and many of the individuals in Orange County who joined the Klan did so out of a sense of civic activism. Upon easily winning the local Anaheim election in April 1924, the Klan representatives promptly fired city employees who were known to be Catholic and replaced them with Klan appointees. The new city council tried to enforce prohibition. After its victory, the Klan chapter held large rallies and initiation ceremonies over the summer.

The opposition to KKK's hold on Anaheim politics organized, bribed a Klansman for their secret membership list, and exposed the Klansmen running in the state primaries; they defeated most of the candidates. Klan opponents in 1925 took back local government, and succeeded in a special election in recalling the Klansmen who had been elected in April 1924. The Klan in Anaheim quickly collapsed, its newspaper closed after losing a libel suit, and the minister who led the local Klavern moved to Kansas. 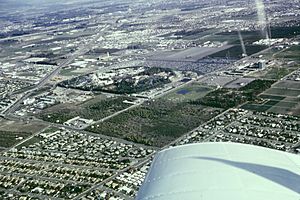 Aerial view of Anaheim and Disneyland in 1965

Construction of the Disneyland theme park began on July 16, 1954, and it opened to the public on July 17, 1955. It has become one of the world's most visited tourist attractions, with over 650 million visitors since its opening. The location was formerly 160 acres (0.65 km2) of orange and walnut trees, some of which remain on the property. Hotels and motels began to spread and residential districts soon followed, with increasing property values. In 2001, Disney's California Adventure (renamed Disney California Adventure Park in 2010) the most expansive project in the theme park's history, opened to the public.

In 1970, the Census Bureau reported Anaheim's population as 9.3% Hispanic and 89.2% non-Hispanic white. In the late 20th century, Anaheim grew rapidly in population. Today, Anaheim has a diverse ethnic and racial composition.

During the large expansion of the Disneyland resort in the 1990s, the city of Anaheim recognized the Anaheim Resort area as a tourist destination. It includes the Disneyland Resort, the Anaheim Convention Center, the Honda Center, and Angel Stadium. In 2007, the city celebrated its sesquicentennial.

The city recognizes several districts, including the Anaheim Resort (the area surrounding Disneyland), Anaheim Canyon (an industrial area north of the Riverside Freeway and east of the Orange Freeway), and the Platinum Triangle (the area surrounding Angel Stadium). Anaheim Hills also maintains a distinct identity.

Panorama of part of East Anaheim in the Santa Ana Canyon 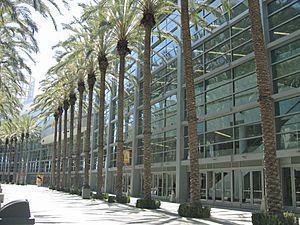 Downtown Anaheim is located in the heart of the Colony Historic District. Downtown is the administrative heart of the city where you find City Hall, Anaheim West Tower, Anaheim Police Headquarters, the Anaheim Chamber of Commerce and the Main Library. Anaheim Ice (formerly Disney Ice), the Downtown Anaheim Farmer's Market, a food hall in a historic 1919 Sunkist packing house, and the Center Street Promenade are also located in Downtown Anaheim. In late 2007, The Muzeo, the newest major museum in Orange County, opened its doors for the first time and is located next to Anaheim West Tower. Pearson Park is also located in Downtown Anaheim, and is named after Charles Pearson, who was Mayor of Anaheim during the time Walt Disney opened Disneyland in Anaheim. One of the major attractions located in Pearson Park is the Pearson Park Amphitheater. In the Colony Historic District just west of Downtown Anaheim is the Mother Colony House, which was built by George Hanson and was the first house built in Anaheim, the founder of Anaheim. Today, it is Anaheim's and Orange County's oldest museum still open to the public. The Woelke-Stoeffel House is a Victorian mansion located next door to the Mother Colony House. Originally the Victorian Home was occupied by the Stoeffel family, early pioneer residents of Anaheim. The home served as headquarters for the local Red Cross until the early 1990s. In 2010–2011, the Woelke-Stoeffel house became refurnished and is now part of the Founder's Park complex. Founder's Park includes the Mother Colony house and a carriage house, which serves as a museum of Anaheim's agricultural history. These three buildings are open every first Saturday from 9 to 12 pm.

According to the 2010 United States Census, Anaheim had a median household income of $59,627, with 15.6% of the population living below the federal poverty line.

The Santa Ana Freeway (I-5), the Orange Freeway (SR 57) and the Riverside Freeway (SR 91) all pass through Anaheim. The Costa Mesa Freeway (SR 55), and the Eastern Transportation Corridor (SR 241) also have short stretches within the city limits.

Anaheim is equidistant from both John Wayne Airport and Long Beach Airport (15 miles), but is also accessible from nearby Los Angeles International (30 miles), and Ontario (35 miles) airports.

All content from Kiddle encyclopedia articles (including the article images and facts) can be freely used under Attribution-ShareAlike license, unless stated otherwise. Cite this article:
Anaheim, California Facts for Kids. Kiddle Encyclopedia.