The station opened in 2014 and replaced a nearby depot and train platforms used by Amtrak and Metrolink. Designed by the global architecture firm HOK, the steel-framed building's entrance is a 120-foot-tall glass wall (37 m). The structure has a compound curved shell that is covered with air-filled plastic pillows through which sunlight illuminates the interior. The arched roof is illuminated with multicolored lights visible from the surrounding area.

ARTIC is located in the Platinum Triangle and near the Anaheim Resort, areas of Anaheim which include major points of interest. It is accessible by bicycle from the Santa Ana River Trail and is adjacent to California State Route 57.

City officials had originally projected daily ridership of 10,000 but initially a typical weekday saw about 2,400 transit riders with 3,900 during concert and sporting events at the nearby venues. By 2019, 4,200 to 5,500 riders were passing through on any given day. Amtrak trains had 287,415 boardings and alightings in fiscal year 2017 at the station. 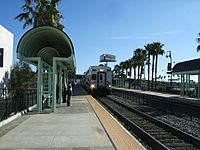 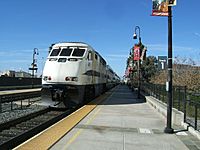 The platforms at the previous station in 2007 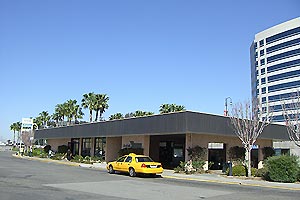 A branch of the Southern Pacific Railway was extended to Anaheim in 1875. In 1887, a rail line to San Diego was built through the Town by Santa Fe Railway. By 1921, there were two Southern Pacific depots and one Santa Fe depot. The Pacific Electric Railway was also planning on a line to connect with the community. Eventually these rail services were discontinued but rail service began again when the city of Anaheim provided a station in 1984 for the Amtrak San Diegan on property on the other side of the State Route 57 freeway belonging to the Atchison, Topeka & Santa Fe Railroad. In October 1986 a new standard design station was constructed about 600 feet (180 m) northwest to a site where Anaheim Stadium was just across the parking lot, appropriately referred to as Anaheim–Stadium. The San Diegan moniker was retired on June 1, 2000, when the service became known as the Pacific Surfliner.

The Orange County Line began service to the station in 1990 as the Orange County Commuter, an Amtrak-operated service between Los Angeles and San Juan Capistrano. In 1994, the line became Metrolink's fifth route known as the Orange County Line with the purchase of the railroad right-of-way, Surf Line, from Santa Fe. The Inland Empire–Orange County Line that runs from San Bernardino through Orange County to Oceanside does not stop here but at nearby Anaheim Canyon station. Both Metrolink lines stop at Orange, the next stop to the south. An average of 500 Metrolink and 400 Amtrak passengers boarded trains daily in the last year of operation of the previous Anaheim station.

The 16-acre (6.5 ha) station is near two freeways: State Route 57, and Interstate 5. The Honda Center is across Katella Avenue on the north side of the site and one of the three gates to Angel Stadium can be reached southwesterly through the Douglass Road underpass. The station has direct access to the Santa Ana River Trail and bicycle racks and lockers. This Metrolink Station also links Disneyland Resort through Anaheim Resort Transportation ARTIC Sports Complex Line 15.

Besides local bus service provided by OCTA and ART, travel service to intercity/international destinations is provided from the complex. Megabus began a bus service between the terminal, Los Angeles, San Jose, Oakland, and San Francisco when the rail station opened in 2014. Greyhound also began operations the same day at the new center, which is about three miles from their former depot. Tres Estrellas de Oro moved their services to Tijuana and Guadalajara, Mexico, into the station in January 2016. 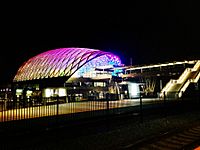 Station from the platforms at night

The tubular steel-framed 67,000-square-foot building (6,200 m2) has a compound curved shell that is covered with a 200,000-square-foot (19,000 m2) ethylene tetrafluoroethylene (ETFE) roof system. This allows diffuse sunlight to illuminate a major portion of the building's interior. At night, the structure can be illuminated in any color with the 1,354 energy-efficient lights glowing through the air-filled plastic pillows which make up the arched roof. The structure's entrance is a 120-foot-tall glass wall (37 m) and leads into a spacious lobby ticketing counters. A plaza leads to the thirteen bus bays. The second floor has space for offices and two restaurants. The third level is a mezzanine with a small lobby and the concourse bridge for access to the stairs or elevators that take travelers down to the railroad tracks. The station design has been criticized due to the lengthy route and distance between the station building and train platforms. Some commuters transferring between bus and train have called the layout "dysfunctional" for pedestrians. 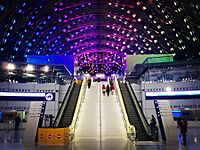 Interior of the Anaheim Station at night

The building was certified LEED Platinum and was awarded the 2015 Public Works Project of the Year by the American Public Works Association. Recognizing excellence in the management and administration of public works projects, the cooperative achievements of the managing agency, contractor, and consultants were highlighted by the award. The building uses a combination of radiant floor and jet diffusers to cool or heat only a 12-to-15-foot high area above the floor (3.7 to 4.6 m). The ETFE foil "pillows" maintain a cool temperature in the unconditioned space at the high elevations of the curtain wall when used in conjunction with glass louvers at both ends that open to allow natural air flow when needed. Twenty percent of the building's power was designed to be generated by solar panels on the parking structures and recycled materials were used in the construction. The complex geometry of the diamond-shaped metal grid that forms the shell is supported by a structural steel frame. This required extensive planning and preparation using building information modeling.

Artist Mikyoung Kim was selected to complete the sole piece of public art slated for the complex. A dynamic holographic experience was integrated into the grand staircase of the main lobby. Different conditions of time and phenomena transform the atmospheric images.

The current site was formerly occupied by the Orange County "Katella Yard" with outdated facilities for the county surveyor, the agricultural commissioner, public works transportation, watershed protection, and flood control operations and maintenance. Orange County Transportation Authority (OCTA) was the lead agency in acquiring the 13.5-acre (5.5 ha) property from the county. On November 21, 2006, the Orange County Board of Supervisors approved the sale and relocation of their operations to clear the site for the new complex. In July 2012, the city of Anaheim, which already owned 2.2 acres (0.89 ha) of the site, agreed to buy the balance of the property from OCTA for $32.5-million as they could not come to terms over a lease. Anaheim will make payments to OCTA over 14 years at a 2 percent simple-interest rate.

California Environmental Quality Act (CEQA) clearance was completed in October 2010 and the National Environmental Policy Act (NEPA) clearance was completed in 2012. KTGY Architecture + Planning was responsible for obtaining approvals, entitlements and creating the land plan. The team of PB/HOK completed design development in May 2012. The construction contract was awarded to Clark Construction Group-California, LP. A ground breaking ceremony for the facility took place in September 2012 and train service began on December 6, 2014. A 30-year lease agreement was approved in January 2013 to allow the Orange County Water District to construct an injection water well and appurtenant facilities on the site.

The main terminal was about $68 million of the total construction cost of $185 million. Operation and maintenance of the terminal was expected to cost $5 million annually but was reduced to $3.8 during the first year though various cost savings, including having the city division of conventions, sports and entertainment take over management. 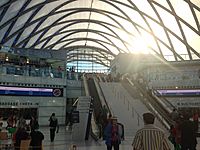 Measure M, a sales tax that funds transportation projects, was the main funding source for the construction of ARTIC. The overall $120 million construction of ARTIC along with environmental studies and other aspects of the project put the total price tag closer to $185.2 million. The main terminal was about $68 million of the cost. A conflict between Metrolink and Amtrak over the platform's height so that it could be used by disabled passengers was one of the biggest issues that had to be resolved during the construction. The redesign of the train platform added extra costs along with expenses for rail improvements but the project was within the project budget as there was a $6 million contingency fund for unanticipated costs.

The city of Anaheim is responsible for the ongoing operating and maintenance costs and planned for the facility to be self-funded. Potential revenue sources anticipated in the planning were advertising, a naming-rights sponsor, and leases from tenant business. During the first years, most of the funding has come from the 2 percent assessment from the resort area hotel guests collected by the Anaheim Tourism Improvement District. Some additional funds have come from Measure M2 which is a half-cent countywide sales tax that helps pay for transportation improvements. The city eventually began to obtain lease revenue from commercial tenants but has continued to manage costs at the depot and seek more revenue through events and filming.

Two 35-foot-tall monument signs (11 m) were approved that display static directions and center advertising for the transit hub. An 84-foot-tall digital billboard (26 m) facing the 57 freeway had been proposed to generate about $800,000 annually in advertising revenue. At a November 2014 meeting, the City Council indefinitely postponed the electronic sign even though it would have been one of the primary funding sources for the $3.6 million cost to operate ARTIC for the first seven months of operation. A naming-rights partner has not been obtained, so city officials will continue with those efforts since this was also supposed to be one of the main funding sources for operation and maintenance of the station.

Located at eastern edge of the Platinum Triangle, the complex would be the eastern terminus of a proposed streetcar system that could connect various destinations in the Anaheim Resort and Platinum Triangle areas. The ARTIC site is the proposed location of a California High-Speed Rail station, and the proposed California-Nevada Interstate Maglev names Anaheim as its southern terminus.

During the 2028 Summer Olympics, the station will serve spectators traveling to and from Olympic venues located in Anaheim. The station sits across from the planned indoor Volley Ball venue; Honda Center.

All content from Kiddle encyclopedia articles (including the article images and facts) can be freely used under Attribution-ShareAlike license, unless stated otherwise. Cite this article:
Anaheim Regional Transportation Intermodal Center Facts for Kids. Kiddle Encyclopedia.