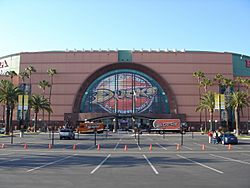 The Honda Center is a sports arena in Anaheim, California. The arena opened on June 19, 1993, and is the current home to the Anaheim Ducks of the National Hockey League (NHL) and will be the home of the future Los Angeles Kiss of the Arena Football League (AFL) in 2014.

The arena was originally known as Pond of Anaheim in 1993 and as Arrowhead Pond of Anaheim from 1993 to 2006. Honda acquired the naming rights for the arena in October 2006.

All content from Kiddle encyclopedia articles (including the article images and facts) can be freely used under Attribution-ShareAlike license, unless stated otherwise. Cite this article:
Honda Center Facts for Kids. Kiddle Encyclopedia.