The Anaheim Convention Center is a major convention center in Anaheim, California. It is located across from the Disneyland Resort on Katella Avenue. The original components, designed by Adrian Wilson & Associates and built by Del E. Webb Corporation, opened in July 1967—including a basketball arena followed shortly by the convention hall. It holds many events, like VidCon, BlizzCon, Anime Expo, D23 Expo, WonderCon, NAMM Show, competitions, and more. In addition to hosting various types of conventions, the Anaheim Convention Center was used to host the wrestling during the 1984 Summer Olympics.

The Arena at the Anaheim Convention Center in 2007.

Originally, the arena was home to the Anaheim Amigos of the American Basketball Association during the first ABA season, 1967–68. The franchise relocated to the Los Angeles Sports Arena and became the Los Angeles Stars immediately thereafter; the team eventually moved to Salt Lake City and became the Utah Stars, capturing the 1970–71 ABA Championship. The Stars' subsequent fan support in Utah set the foundation for the NBA's Utah Jazz. The San Diego Friars of WTT played some of their home matches in the arena between 1975 and 1977. In 1978, the Anaheim Oranges of WTT used the arena as their primary home venue. The arena was also home to the California Surf of the NASL for one indoor season (1979–80).

According to frequent news reports, the largest exposition held at the Convention Center in recent years has been the Winter NAMM Show. This music-equipment convention (trade only, not open to the general public) had 1,560 exhibitors and a record-breaking 88,100 attendees during the 2008 show. The NAMM Show has been running at the Anaheim Center since 1977, except for a 3-year break in 1998–2000 while the Convention Center underwent major renovations. In 2008, news reports indicated that NAMM's long-term lease with the Anaheim Convention Center authority would end in 2010, and NAMM was applying pressure to the City of Anaheim to further expand and improve the convention center.

The Anime Expo was hosted at the Anaheim Convention Center in 1996 and again from 2003 through 2006 and was one of the convention center's biggest public events.

Another large convention held at the Center is the Medical Design and Manufacturing Show, held shortly after Winter NAMM.

The venue served as the site for wrestling at the 1984 Summer Olympics.

It was briefly home to the Anaheim Arsenal of the basketball league now known as the NBA G League, who relocated to Springfield, Massachusetts for the 2009–10 season and since 2014 have played in Grand Rapids, Michigan as the Grand Rapids Drive.

During the 1992 Los Angeles riots, the Los Angeles Clippers were forced to move Game 4 of their NBA playoff series versus the Utah Jazz to the Convention Center. 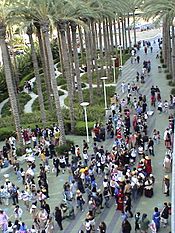 Disney's inaugural D23 Expo, a biennial convention for Disney fans, was held at the Anaheim Convention Center in 2009. The convention center has hosted all subsequent D23 Expos.

Lucasfilm's Star Wars Celebration fan gathering was held at the convention center in 2015.

Minecon was held at the venue in September 2016.

It hosted the 2017 World Weightlifting Championships.

The Collegiate Challenge gymnastics meet was held in the arena in 2019.

The arena will host indoor volleyball during the 2028 Summer Olympics.

The convention center and arena is currently hosting the California State Future Farmers of America leadership conference, which started in 2018, the largest youth convention in the State of California. As of 2019, 9,000 students from across the state of California have attended the event, with more expecting to show up in the future.

The convention center was a filming location for Star Trek: Picard and will make an appearance in the show as a part of Starfleet Headquarters.

All content from Kiddle encyclopedia articles (including the article images and facts) can be freely used under Attribution-ShareAlike license, unless stated otherwise. Cite this article:
Anaheim Convention Center Facts for Kids. Kiddle Encyclopedia.