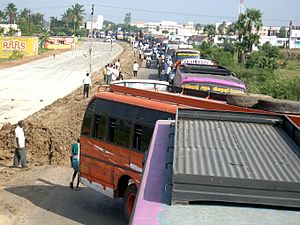 Traffic congestion is when vehicles travel slower because there is too much traffic on roads. This makes trip times longer, and increases queueing. This is also known as a traffic jam. Congestion may result from a decrease in capacity, for example accidents on the road or roads being closed. Bad road layouts can also restrict capacity. Increased traffic, for example by many cars leaving a sports stadium at the same time, can also cause congestion.

Where congestion is common, for example because of commuting in big cities, several methods are used to relieve it. Cars may be banned in certain districts or certain times, or made to carry passengers or pay a fee, or people may use public transport, such as rapid transit, which travel independently of car traffic and are not affected by traffic jams.

All content from Kiddle encyclopedia articles (including the article images and facts) can be freely used under Attribution-ShareAlike license, unless stated otherwise. Cite this article:
Traffic congestion Facts for Kids. Kiddle Encyclopedia.