Corona is a city in Riverside County, California, United States. As of the 2010 census, the city had a population of 152,374, up from 124,966 at the 2000 census. The cities of Norco and Riverside lie to the northeast, Eastvale to the north, Chino Hills to the northwest, Yorba Linda, and the Cleveland National Forest and the Santa Ana Mountains to the southwest. Unincorporated areas of Riverside County line all of its other borders.

Corona, originally named South Riverside, was founded at the height of the Southern California citrus boom in 1886, and is advantageously situated at the upper end of the Santa Ana River Canyon, a significant pass through the Santa Ana Mountains. The town of Corona was once the "Lemon Capital of the World." A museum there presents the lemon's former role in the local economy. The city derived its name (and its nickname, The Circle City) from the curious layout of its streets, with a standard grid enclosed by the circular Grand Boulevard, 2.75 miles (4.43 kilometers) in circumference. The street layout was designed by Hiram Clay Kellogg, a civil engineer from Anaheim who was an influential figure in the early development of Orange County.

Corona was established as a town by the South Riverside Land and Water Company. The company was incorporated in 1886; founding members included ex-Governor of Iowa, Samuel Merrill, R.B. Taylor, George L. Joy, A.S. Garretson, and Adolph Rimpau. Originally a citrus growers' organization, it purchased the lands of Rancho La Sierra of Bernardo Yorba, and the Rancho Temescal grant and the colony of South Riverside was laid out. They also secured the water rights to Temescal Creek, its tributaries and Lee Lake. Dams and pipelines were built to carry the water to the colony. In 1889, the Temescal Water Company was incorporated, to supply water for the new colony. This company purchased all the water-bearing lands in the Temescal valley and began drilling artesian wells.

Originally located in San Bernardino County, the city was named South Riverside and received its post office in that name on August 11, 1887. In 1893, South Riverside became part of the new Riverside County. In 1896, the city was renamed Corona for its circular Grand Boulevard, where three international automobile races were held in 1913, 1914 and 1916.

The city of Corona has been popular among celebrities drawn to its upscale areas and relative privacy compared to Los Angeles. Desi Arnaz spent time at their ranch, located in north Corona, and played golf often at Cresta Verde Golf Course in the northeastern section of the city. After their divorce, Mr. Arnaz continued to live in Corona.

In recent years Corona has been known as the Gateway to the Inland Empire. Prior to the 1980s, the city was a largely agricultural community, dominated by citrus orchards, ranches, and dairy farms. High real estate prices in Los Angeles and Orange counties made the area's land desirable to developers and industrialists, and by the late 1990s Corona was considered a major suburb of Los Angeles.

Corona has become a bedroom community for Orange County, Los Angeles, and the larger cities of the Inland Empire. The development of commerce and industry in the city has been accelerated by access to the area via the 91 Freeway, with many firms leaving northern Orange County to be closer to their employees' homes in Corona and Riverside. The construction of the nearby 71 Freeway has linked Corona to the Pomona and San Gabriel valleys.

In 2002, the city government considered an initiative to secede from Riverside County and form an autonomous Corona County because the city government and some residents were dissatisfied with how services were handled in nearby areas. The effort was also considered by areas in other cities in the western part of the county as far south as Murrieta. Whether nearby cities such as Norco, California would have been included in the new county are unknown. The proposed county would have been bordered by San Bernardino County to the northwest, and by Orange County to the west, but it never came to fruition.

Corona is located in the Greater Los Angeles Area.

In recent years, there are talks to construct a proposed 10 mi (16 km) automobile and fast-speed train tunnel under Santiago Peak to connect Interstate 15 in Corona with Interstate 5 and the 55 Freeway of Orange County, to cut down on commuter traffic on the already crowded or high-traffic 91 Freeway.

Corona experiences a warm Mediterranean climate (Köppen climate classification CSa) and has mild winters and hot summers. Most of the rainfall (as in all of Southern California) occurs during winter and early spring. The winter low temperatures can get cold enough for frost, with rare snowfall seen on the local foothills. Winter days are pleasant, with the mercury staying around 65 degrees Fahrenheit (occasionally warming into the 70s). Summertime is hot, with highs averaging in the low 90s. During the hottest months, daytime temperatures in Corona often exceed 100 degrees.

There were 37,839 households out of which 49.6% had children under the age of 18 living with them, 63.8% were married couples living together, 11.2% had a female householder with no husband present, and 19.7% were non-families. 14.4% of all households were made up of individuals and 3.8% had someone living alone who was 65 years of age or older. The average household size was 3.3 and the average family size was 3.6. 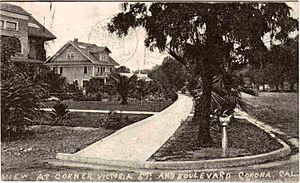 Many of the homes in the center of town, such as the ones seen in this early 1900s postcard, were recognized by the National Register of Historic Places in 2011 as part of the Grand Boulevard Circle Historic District.

The north part of the city of Corona borders the city of Norco. This area (north of CA 91) is primarily residential and commercial. The makeup is primarily middle and upper-middle income, with most housing being built after the late 1990s, and is known for being well maintained and very safe. This area is home to well rated schools as well as shopping including Costco, Home Depot, and others. Prominent areas include Corona Hills and Corona Ranch.

Most of the City's downtown area lies north of the 91 freeway, and is home to the former Fender Museum (now the new Corona Community Center). The area is prominently full of office and apartment buildings, with the newest one (Main Street Metro) under construction. Downtown is also the location of the North Main Corona Metrolink station, which is one of two Metrolink stations in the city.

The central city area includes the inner circle of Grand Avenue as well as all areas south of CA 91 and north of Ontario Avenue. This is the oldest area of the city by far, with most housing having been built around 1910. This part of the city has a mixed Hispanic and white population, and consists of many restored historic residences.

South Corona is the newest and most upscale part of the city, and is located south of Ontario Avenue. Most housing stock was built between the early 2000s to the present, and ranges from suburban neighborhoods to custom built mansions in the foothills. This area has the highest rated schools in the city (as well as some of the highest in the region) and is known for being very clean, homogeneous, and well maintained. It is primarily upper-middle class and upper class income levels.

Sierra Del Oro is the western portion of Corona, comprising the neighborhoods situated along Green River Rd, extending all the way towards the 91 freeway and the Orange/Riverside county line. This area holds many apartment complexes geared towards commuters. The Corona Auto Center is located at the base of the foothills. In December 2016, construction of the Foothill Parkway expansion was completed, allowing a direct street link between Sierra Del Oro and South Corona.

Dos Lagos is located near the southern city limits of Corona, straddling Interstate 15. The area is mostly dominated by upscale apartment complexes, newer homes, a shopping center, and a large golf course.

Coronita, California is an unincorporated, census-designated area in Riverside County enclosed in Western Corona. An annexation attempt in 1986 by the city failed.

Temescal Valley, California is an unincorporated but census-designated area in Riverside County at the southernmost end of Corona city limits, and is included in the city's sphere of influence. It includes the neighborhoods of Sycamore Creek, Trilogy, The Retreat and Horsethief Canyon Ranch. As of 2013, the City of Corona has applied for annexation of the area through the Riverside County Local Agency Formation Commission (LAFCO). On September 26, 2013, the Commission formally denied the City of Corona's request for annexation. The contract between Corona and the County to provide its emergency services to the northern-third of Temescal Valley persists.

Although the arguments of the opponents of annexation included the fear of being "Coronians" and losing the area's identity, Temescal Valley's ZIP Code remains associated with Corona, CA.

Home Gardens is a Census Designated place within the City of Corona's sphere of influence. The neighborhood is largely populated by Hispanic and Caucasian communities. Home Gardens is one of Corona's largest neighborhoods with a population estimate of approximately 12,000 residents. It is also one of the city's lowest income areas. The neighborhood is served by Magnolia Avenue, a major thoroughfare which leads into the City of Riverside. Bus service is served by the Riverside Transit Agency (RTA) and Corona Cruiser.

El Cerrito is located on the southeastern part of the city, just a few exits away on the I-15 N of the Dos Lagos Neighborhood. El Cerrito is mostly a rural/suburban area with many dirt roads in alleyways and no ranches. El Cerrito is home to El Cerrito Sports Park, a large park consisting of one baseball field and a popular destination for Little League Baseball and local school softball teams. El Cerrito is served by Ontario Ave./Temescal Canyon Rd.

Eagle Glen is a predominantly upper-middle-class neighborhood. It is located between South Corona and El Cerrito, and is the neighborhood around Wilson Elementary and Eagle Glen Park. This neighborhood is known for being very clean and well maintained, with very good schools.It is close to Wilson Elementary, El Cerrito Middle School, and Santiago High School, all of which are California distinguished schools. Many of the homes are valued anywhere from $400,000 to $650,000. Eagle Glen is also home to a golf course.

The Arts Alive Council is a non-profit organization created with the purpose to "foster, promote, and increase the public knowledge and appreciation of the arts and cultural activities in the greater Corona Area." Members include the Corona Symphony Orchestra, Circle City Chorale, Christian Arts and Theater, and Corona Dance Academy.

Corona has been referred to as the 'record holder in the fumbled time capsule category' with 17 time capsules buried – and lost.

The following are Corona's sister cities as designated by Sister Cities International.

All content from Kiddle encyclopedia articles (including the article images and facts) can be freely used under Attribution-ShareAlike license, unless stated otherwise. Cite this article:
Corona, California Facts for Kids. Kiddle Encyclopedia.