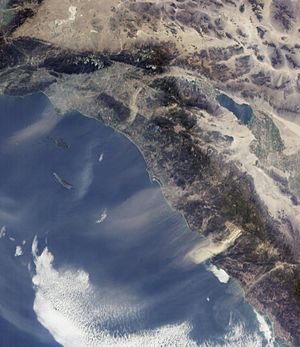 The Santa Ana winds sweep down from the deserts and across coastal Southern California, pushing dust and smoke from wildfires far out over the Pacific Ocean. Los Angeles is in the upper left of this image, while San Diego is near the center.

The Santa Ana winds are a kind of wind that happen in Southern California and northern Baja California. They are strong and extremely dry. They start in the mountains and blow towards the Pacific Ocean. They often happen during the autumn and winter. They cause wildfires to become worse.

These winds are a kind of katabatic wind, which means they come from the mountains.

All content from Kiddle encyclopedia articles (including the article images and facts) can be freely used under Attribution-ShareAlike license, unless stated otherwise. Cite this article:
Santa Ana winds Facts for Kids. Kiddle Encyclopedia.