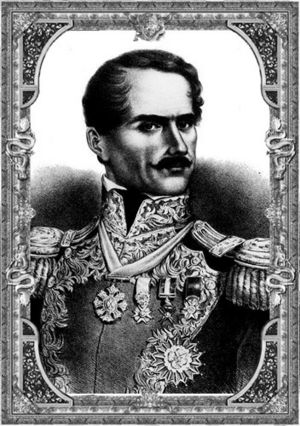 Antonio López de Santa Anna Pérez de Lebrón (February 21, 1794 - June 21, 1876) was a Mexican general and dictator. Under his rule of Mexico, it lost half its territory. Santa Anna was president 11 times. He fought two wars against the United States. In the war against Texas (1835-1836), he won the famous Battle of the Alamo, but later he lost the Battle of San Jacinto and was taken prisoner by the Americans. He also lost the Mexican- American War with the United States (1846-1848),

All content from Kiddle encyclopedia articles (including the article images and facts) can be freely used under Attribution-ShareAlike license, unless stated otherwise. Cite this article:
Antonio López de Santa Anna Facts for Kids. Kiddle Encyclopedia.