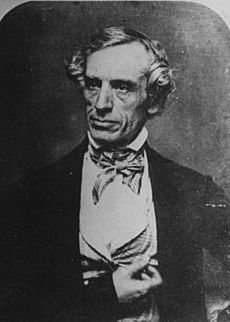 A Daguerreotype is a method of creating photographs that is no longer in general use. A man called Louis-Jacques-Mandé Daguerre invented the daguerreotype process in France in 1839.

The new type of photography became very popular very quickly as it was capable of capturing a "truthful likeness." By 1850, there were over seventy daguerreotype studios in New York alone.

However the popularity of the daguerreotype was short lived as other cheaper processes were invented. By the late 1850s faster and less expensive processes such as the ambrotype, became available. A drawback of the Daguerreotype was that there was no negative from which to produce lots of images. Each picture was therefore unique, the only way to get a copy was to rephotograph the image. 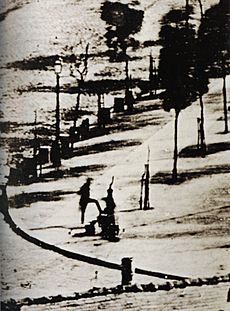 Boulevard du Temple by Daguerre: shows a man who stood still getting his boots polished. 1838/39

All content from Kiddle encyclopedia articles (including the article images and facts) can be freely used under Attribution-ShareAlike license, unless stated otherwise. Cite this article:
Daguerreotype Facts for Kids. Kiddle Encyclopedia.