California has taken legislative steps towards reducing the possible effects of climate change by incentives and plans for clean cars, renewable energy, and stringent caps on big polluting industries.

Development of the Scoping Plan is a central requirement of AB 32, that calls on California to reduce its greenhouse gas emissions to 1990 levels by 2020.

The comprehensive approach includes both new and existing measures in every sector of California's economy.

It includes a series of proposals that would become law in 2012, with some measures going into effect two years earlier. The initiatives include implementing a cap-and-trade program on carbon dioxide emissions (that will be developed in conjunction with the Western Climate Initiative, to create a regional carbon market) that will require buildings and appliances to use less energy, oil companies to make cleaner fuels, and utilities to provide a third of their energy from renewable sources like wind, solar and geothermal power and proposes to expand and strengthen existing energy efficiency programs. The Plan will also encourage development of walkable cities with shorter commutes, high-speed rail as an alternative to air travel, and will require more hybrid vehicles to move goods and people, following the implementation of the California Clean Car law (the Pavley standards).

Several additional initiatives and measures play important roles in reaching the required reductions under AB 32. These include:

The Alternative Fuel Vehicle Incentive Program (abbreviated as AFVIP, also known as Fueling Alternatives) is funded by the California Air Resources Board (CARB), offered throughout the state of California and administered by the California Center for Sustainable Energy (CCSE). A total of $25 million was appropriated to promote the use and production of vehicles capable of running on alternative fuels. Such alternative energy sources include compressed natural gas and electricity via all-electric vehicles and Plug-in hybrid electric vehicles (PHEV).

Vehicles using alternative fuels include Global Electric Motorcars, Vectrix, and ZAP vehicles. The 2008 Tesla Roadster and 2008 ZENN neighborhood electric vehicle are also on the list of vehicles eligible for rebates under the Fueling Alternatives.

The PHEV Research Center was launched with fundings from the California Air Resources Board. Fueling Alternatives includes, among others, Global Electric Motorcars, Vectrix and ZAP vehicles. The 2008 Tesla Roadster and 2008 ZENN neighborhood electric vehicle have been added to the list of vehicles eligible for rebates under the Fueling Alternatives [13] .

A 2011 study projected that the frequency and magnitude of both maximum and minimum temperatures would increase significantly as a result of global warming. 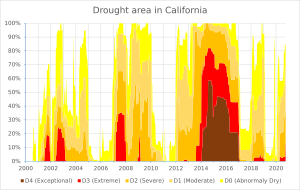 According to the NOAA Drought Task Force report of 2014, the drought is not part of a long-term change in precipitation and was a symptom of the natural variability, although the record-high temperature that accompanied the recent drought may have been amplified due to human-induced global warming. This was confirmed by a 2015 scientific study which estimated that global warming "accounted for 8–27% of the observed drought anomaly in 2012–2014... Although natural variability dominates, anthropogenic warming has substantially increased the overall likelihood of extreme California droughts."

In February 2014, the Californian drought reached for the first time in the 54-year history of the State Water Project to shortages of water supplies. The California Department of Water Resources planned to reduce water allocations to farmland by 50%. California's 38 million residents experienced 13 consecutive months of drought. This is particularly an issue for the state's 44.7 billion dollar agricultural industry, which produces nearly half of all U.S.-grown fruits, nuts, and vegetables. According to NASA, tests published in January 2014 have shown that the twelve months prior to January 2014 were the driest on record, since record-keeping began in 1885. Lack of water due to low snowpack prompted Californian governor Jerry Brown to order a series of stringent mandatory water restrictions on April 1, 2015.

Expected increases in extreme weather could lead to increased risk of illnesses and death.

From May to September 1999 – 2003, a study was conducted in nine Californian counties that found that for every 10 °F (5.6 °C) increase in temperature, there is a 2.6 percent increase in cardiovascular deaths.

A study of seven counties impacted by the 2006 heat wave found a 9 percent increase in daily mortality per 10 degrees Fahrenheit change din apparent temperature for all counties combined. This estimate is 3 times greater than the effect estimated for the rest of the warm season. The estimates indicate that actual mortality during the 2006 heat wave was two or three times greater than the initial coroner estimate of 147 deaths.

Research suggests that the majority of air pollution related health effects are caused by ozone (O3) and particulate matter (PM). It should be noted that many other pollutants that are associated with climate change, such as nitrogen dioxide, sulfur dioxide, and carbon monoxide, also have health consequences.

Five of the ten most ozone-polluted metropolitan areas in the United States (Los Angeles, Bakersfield, Visalia, Fresno, and Sacramento) are in California. Californians suffer from a large variety of health consequences due to air pollution – including 18,000 premature deaths each year and tens of thousands of other illnesses.

Climate change may lead to exacerbated air pollution problems. Higher temperatures catalyze chemical interactions between nitrogen oxide, volatile organic gases and sunlight that lead to increases in ambient ozone concentrations in urban areas. A study found that for each 1 degree Celsius (1 °C) rise in temperature in the United States, there are an estimated 20–30 excess cancer cases, as well as approximately 1000 (CI: 350–1800) excess air-pollution-associated deaths. About 40 percent of the additional deaths may be due to ozone and the rest to particulate matter annually. Three hundred of these annual deaths are thought to occur in California.

The Natural Resources Defense Council (NRDC) estimates that under a business-as-usual scenario, between the years 2025 and 2100, the cost of providing water to the western states in the United States will increase from $200 billion to $950 billion per year, an estimated 0.93–1 percent of the United States' gross domestic product (GDP). Four climate change impacts—hurricane damage, energy costs, real estate losses, and water costs—alone are projected to cost 1.8 percent of the GDP of the United States, or, just under $1.9 trillion in 2008 U.S. dollars by the year 2100.

A study conducted in 2009 showed that increases in frequency and intensity of extreme weather due to climate change will lead to a decreased productivity of agriculture, revenue losses, and the potential for lay offs. Changing weather and precipitation patterns could require expensive adaptation measures, such as relocating crop cultivation, changing the composition or type of crops, and increasing inputs such as pesticides to adapt to changes in ecological composition, that lead to economic denigration and job loss. Climate change has adverse effects on agricultural productivity in California that cause laborers to be increasingly affected by job loss. For example, the two highest-value agricultural products in California’s $30 billion agriculture sector are dairy products (milk and cream, valued at $3.8 billion annually) and grapes ($3.2 billion annually). Climate change is expected to decrease dairy production by between 7–22 percent by the end of the century. It is also expected to adversely affect the ripening of wine grapes, substantially reducing their market value.

All content from Kiddle encyclopedia articles (including the article images and facts) can be freely used under Attribution-ShareAlike license, unless stated otherwise. Cite this article:
Climate change in California Facts for Kids. Kiddle Encyclopedia.