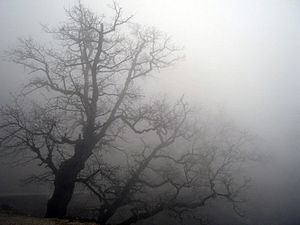 Fog near a tree.

Fog is mist when it is very thick. It may appear on land or sea. It usually lowers visibility (makes it hard to see very far). When fog forms at high levels it creates a cloud called stratus. When the air chills, moisture will turn to fog.

Fog is made up of tiny water droplets or, in very cold conditions, ice crystals. When seen on a high speed camera, (a special camera that takes many frames and can view videos at very low speed) it looks like hundreds of small water droplets moving through the air. These water droplets make up the fog or mist. There are many types of fog, such as evaporation fog, advection fog, radiation fog, and upslope fog. The thickness of fog varies depending on the atmosphere, temperature, weather and location. 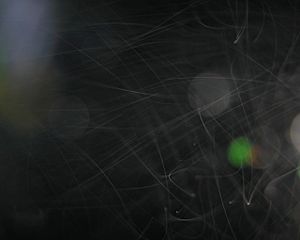 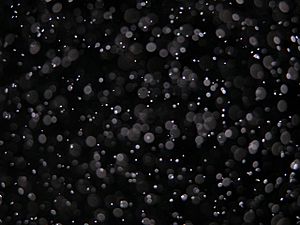 Fog forms when the difference between air temperature and dew point is less than 2.5 °C or 4 °F.

Fog begins to form when water vapor condenses into tiny liquid water droplets suspended in the air. Six examples of ways that water vapor is added to the air are by wind convergence into areas of upward motion; precipitation or virga falling from above; daytime heating evaporating water from the surface of oceans, water bodies, or wet land; transpiration from plants; cool or dry air moving over warmer water; and lifting air over mountains. Water vapor normally begins to condense on condensation nuclei such as dust, ice, and salt in order to form clouds. Fog, like its elevated cousin stratus, is a stable cloud deck which tends to form when a cool, stable air mass is trapped underneath a warm air mass.

Fog can form suddenly and can dissipate just as rapidly. The sudden formation of fog is known as "flash fog".

Fog commonly produces precipitation in the form of drizzle or very light snow. Drizzle occurs when the humidity of fog attains 100% and the minute cloud droplets begin to coalesce into larger droplets. This can occur when the fog layer is lifted and cooled sufficiently, or when it is forcibly compressed from above by descending air. Drizzle becomes freezing drizzle when the temperature at the surface drops below the freezing point.

The thickness of a fog layer is largely determined by the altitude of the inversion boundary, which in coastal or oceanic locales is also the top of the marine layer, above which the air mass is warmer and drier. The inversion boundary varies its altitude primarily in response to the weight of the air above it, which is measured in terms of atmospheric pressure. The marine layer, and any fogbank it may contain, will be "squashed" when the pressure is high, and conversely, may expand upwards when the pressure above it is lowering.

Fog, in the form of a cloud, descends upon a High Desert community in California, while leaving the mountain exposed 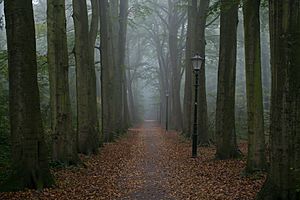 Fog can form in a number of ways, depending on how the cooling that caused the condensation occurred. 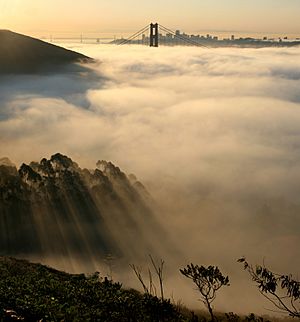 Although strong winds often mix the air and can disperse, fragment, or prevent many kinds of fog, markedly warmer and humid air blowing over a snowpack can continue to generate advection fog at elevated velocities up to 50 mph/80 km/h or more -- this fog will be in a turbulent, rapidly moving, and comparatively shallow layer, observed as inches/a few cm in depth over flat farm fields, flat urban terrain and the like, and/or form more complex forms where the terrain is different such as rotating areas in the lee of hills or large buildings and so on.

The advection of fog along the California coastline is propelled onto land by one of several processes. A cold front can push the marine layer coast-ward, an occurrence most typical in the spring or late fall. During the summer months, a low pressure trough produced by intense heating inland creates a strong pressure gradient, drawing in the dense marine layer. Also during the summer, strong high pressure aloft over the desert southwest, usually in connection with the summer monsoon, produces a south to southeasterly flow which can drive the offshore marine layer up the coastline; a phenomenon known as a "southerly surge", typically following a coastal heat spell. However, if the monsoonal flow is sufficiently turbulent, it might instead break up the marine layer and any fog it may contain. Moderate turbulence will typically transform a fog bank, lifting it and breaking it up into shallow convective clouds called stratocumulus.

All content from Kiddle encyclopedia articles (including the article images and facts) can be freely used under Attribution-ShareAlike license, unless stated otherwise. Cite this article:
Fog Facts for Kids. Kiddle Encyclopedia.