Jan Mayen is an island in the Arctic Ocean. It is part of Norway. The island's area is 373 km². A large part of the island is an active volcano, the Beerenberg, which is 2,277m high. Jan Mayen is 600 km north of Iceland, 500 km east of Greenland and 1000 km west of the Norwegian mainland.

There is a radio station and a meteorological station on the island. The staff at these stations are the only people living on the island. 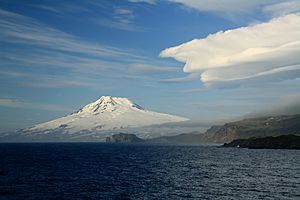 Jan Mayen, with its volcano

There are many claims and stories about discovery of the island. Some claims and possible discoveries are as early as the beginning of the 6th century. However, the first discovery that is certain was in 1614. The Dutchman Jan Jacobs May van Schellinkhout visited the island then and it is named for him. His first mate made maps of some of the coast.

It is incorrectly assumed that Henry Hudson discovered the island in 1607 and called it Hudson's Tutches or Touches, but there is no evidence for this. Thereafter it was allegedly seen several times by navigators who claimed its discovery and renamed it. Thus, in 1611 or the following year whalers from Hull named it Trinity Island; in 1612 Jean Vrolicq, a French whaler, claimed in 1629 that he had discovered the island and called it Île de Richelieu; and in 1614 English captain John Clarke named it Isabella. 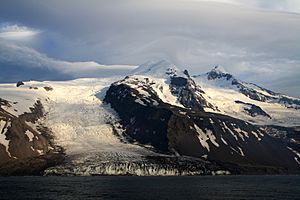 Jan Mayen Island has one exploitable natural resource, gravel, from the site at Trongskaret. Other than this, economic activity is limited to providing services for employees of Norway's radio communications and meteorological stations located on the island. Jan Mayen has one unpaved airstrip, Jan Mayensfield. The coast has no ports or harbours, only offshore anchorages.

There are important fishing resources, and the existence of Jan Mayen establishes a large exclusive economic zone around it. A dispute between Norway and Denmark regarding the fishing exclusion zone between Jan Mayen and Greenland was settled in 1988 granting Denmark the greater area of sovereignty. Significant deposits of petroleum and natural gas are suspected by geologists to lie below Jan Mayen's surrounding seafloors.

The only inhabitants on the island are personnel working for the Norwegian Armed Forces and the Norwegian Meteorological Institute. Eighteen people spend the winter on the island, but the population may double (35) during the summer, when heavy maintenance is performed. Personnel serve either six months or one year, and are exchanged twice a year in April and October. The support crew, including mechanics, cooks, and a nurse, are among the military personnel. 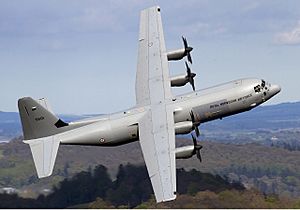 Transport to the island is provided by C-130 Hercules military transport planes operated by the Royal Norwegian Air Force that land at Jan Mayensfield's gravel runway. The planes fly in from Bodø Main Air Station eight times a year. Since the airport does not have any instrument landing capabilities, good visibility is required, and it is not uncommon for the planes to have to return to Bodø, two hours away, without landing. For heavy goods, freight ships visit during the summer, but since there are no harbours, the ships must anchor.

All content from Kiddle encyclopedia articles (including the article images and facts) can be freely used under Attribution-ShareAlike license, unless stated otherwise. Cite this article:
Jan Mayen Facts for Kids. Kiddle Encyclopedia.