Lower Austria (German: Niederösterreich) is a state of Austria. It is in the northeast of the country. It is the biggest state by area, the second biggest by population, and also the historical core of Austria.

Sankt Pölten has been the capital since 1986, before this was Vienna. Sankt Pölten is also the biggest city of the state, followed by Wiener Neustadt.

It borders to the following other states of Austria: in the west to Upper Austria, in the south to Styria, and in the southeast to Burgenland. The city/state of Vienna lies in the middle of Lower Austria.

It has also borders with other countries: in the north the Czech Republic and in the east Slovakia.

The northern part has many hills. Those in the Waldviertel belong to the ridge of Manhartsberg (part of the Bohemian Massif), and those in the Weinviertel are spurs of the Carpathian Mountains.
The southern part is more mountainous with spurs of the Alps, like the Styrian-Lower Austrian Limestone Alps and the Vienna Woods (Wienerwald). Highest summit is the Schneeberg at 2,076 m.

Lower Austria is very rural, 42% is agricultural and 40% is wooded. Winegrowing can especially be found in the areas/regions of Wachau, Weinviertel and Thermenregion.

About 80% of the population is Roman Catholic.

Seats taken in the Lower Austrian Parliament (56) since the elections of 2013:

Lower Austria is governed by a coalition of ÖVP and SPÖ. Governor has been Johanna Mikl-Leitner (ÖVP) since April 2017. 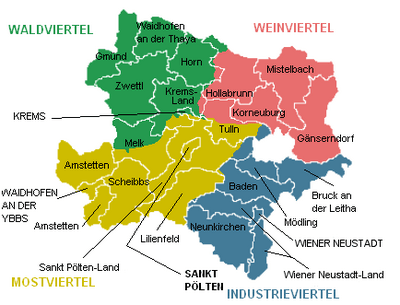 Regions and districts of Lower Austria 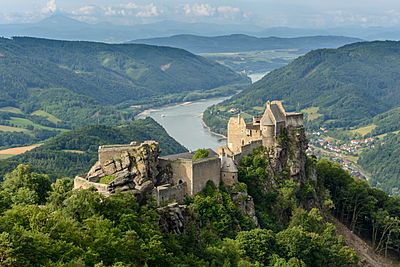 Aggstein and Wachau valley with the Danube River

All content from Kiddle encyclopedia articles (including the article images and facts) can be freely used under Attribution-ShareAlike license, unless stated otherwise. Cite this article:
Lower Austria Facts for Kids. Kiddle Encyclopedia.