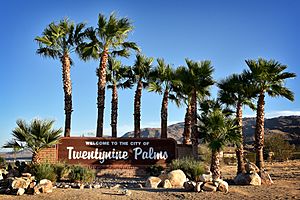 Twentynine Palms (also known as 29 Palms) is a city in San Bernardino County, California. Twentynine Palms serves as one of the entry points to Joshua Tree National Park.

The city is located in the Mojave Desert in Southern California. It lies on the northern side of the Joshua Tree National Park and includes one of the entrances to the Park, at the Oasis of Mara.

According to the United States Census Bureau, the city has a total area of 59.1 square miles (153 km2), all land.

Twentynine Palms was named for the palm trees found there in 1852 by Col. Henry Washington while surveying the San Bernardino base line. A post office was established in 1927.

Nearby is a small Indian reservation belonging to the Twentynine Palms Band of Mission Indians.

The Joshua Tree National Park wilderness area which lies just alongside to the South of Twentynine Palms was designated a National Monument in 1936 and became a National Park in 1994.

The nearby Marine Corps Air Ground Combat Center Twentynine Palms was founded in 1952.

Of the 8,095 households 43.3% had children under the age of 18 living in them, 54.5% were opposite-sex married couples living together, 12.9% had a female householder with no husband present, 4.9% had a male householder with no wife present. There were 5.0% unmarried opposite-sex partnerships, and 1.6% same-sex married couples or partnerships. 21.1% of households were one person and 5.6% were one person aged 65 or older. The average household size was 2.68 and the average family size was 3.10.

The median household income was $42,572. About 14.4% of the population were living below the poverty line.

A song, "The Lady from 29 Palms", was written by Allie Wrubel in 1947 and recorded by such artists as Frank Sinatra, Freddy Martin, Tony Pastor, and The Andrews Sisters.

Former Led Zeppelin singer Robert Plant had a hit single called "29 Palms", from his solo album Fate of Nations in 1993.

Track two of the album "Places" by Brad Mehldau, released in 2000, is named after the city.

Some scenes in the 1964 comedy film "Kiss Me, Stupid" were shot in Twentynine Palms.

On April 22, 1945, The Jack Benny Program was broadcast from Twentynine Palms Auxiliary Naval Air Station. There were jokes about the base's dry, hot weather, along with a comedic sketch of the town's history.

The Oasis of Mara, the original source of water and the historic source of all economic activity in the area, is divided into two parts: to the east, a long strip of palm trees terminating at one by the Joshua Tree National Park Visitor's Center, which is visited by approximately 140,000 people every year, and maintained by the United States National Park Service. To the west, the remainder of the oasis is owned by the 29 Palms Inn, an historic hotel, and ends in a large shaded pond.

The current economy depends largely on the nearby Marine Corps Air Ground Combat Center, as well as tourism associated with Joshua Tree National Park. In February 2015, the city set in place rules governing vacation rentals, and has granted approximately one hundred permits, compared to over one thousand in the nearby community of Joshua Tree.

The city has a series of 26 outdoor murals painted on local buildings featuring various aspects of desert life and history.

All content from Kiddle encyclopedia articles (including the article images and facts) can be freely used under Attribution-ShareAlike license, unless stated otherwise. Cite this article:
Twentynine Palms, California Facts for Kids. Kiddle Encyclopedia.