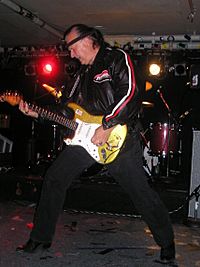 Richard Anthony Monsour (May 4, 1937 – March 16, 2019), known professionally as Dick Dale, was an American rock guitarist. He was known as "The King of the Surf Guitar", which was also the title of his second studio album. He was born in Boston, Massachusetts.

All content from Kiddle encyclopedia articles (including the article images and facts) can be freely used under Attribution-ShareAlike license, unless stated otherwise. Cite this article:
Dick Dale Facts for Kids. Kiddle Encyclopedia.