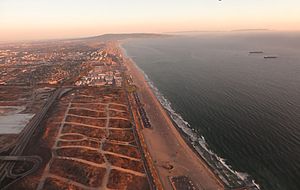 El Segundo is a city in Los Angeles County, California, United States. El Segundo, from Spanish, means The Second in English. Located on the Santa Monica Bay, it was incorporated on January 18, 1917, and part of the South Bay Cities Council of Governments. The population was 16,654 at the 2010 census, up from 16,033 at the 2000 census.

The El Segundo and Los Angeles coastal area was first settled by the Tongva (or Gabrieleños) and Chumash Native American tribes hundreds of years ago. The area was once a part of Rancho Sausal Redondo ("Round Willow Patch Ranch"). Rancho Sausal Redondo extended from Playa Del Rey in the North to Redondo Beach in the South. Originally a Mexican land grant owned by Antonio Ygnacio Avila, the rancho was later purchased by a Scottish baronet named Sir Robert Burnett. After his return to Scotland, the property was purchased by then current manager of the rancho, Daniel Freeman. Daniel Freeman sold portions of the rancho to multiple owners. George H. Peck owned the 840 acres (3.4 km2) of land the Chevron Refinery now sits on. Peck also developed land in neighboring El Porto where a street still bears his name. The city earned its name ("the second" in Spanish) as it was the site of the second Standard Oil refinery on the West Coast (the first was at Richmond in Northern California), when Standard Oil of California purchased the 840 acres (3.4 km2) of farm land in 1911. 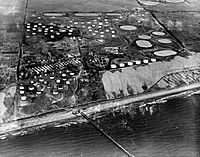 The company was renamed Chevron in 1984, and the El Segundo refinery will soon enter its second century of operation. The city was incorporated in 1917. 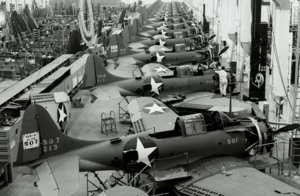 The Douglas Aircraft Company plant in El Segundo was one of the major aircraft manufacturing facilities in California during World War II. It was one of the major producers of SBD Dauntless dive bombers, which achieved fame in the Battle of Midway. The facility, now operated by Northrop Grumman, is still an aircraft plant.

Pollution and toxic waste cleanup remain issues as El Segundo converts industrial sites to shopping malls and sports facilities. The north and south boundaries of the town are Los Angeles International Airport and Manhattan Beach, with the Pacific Ocean as the western boundary. Aircraft noise from LAX is a major issue for residents on the north side of El Segundo. Residents are currently active in tree-planting along Imperial Highway.

According to the United States Census Bureau, the city has a total area of 5.5 square miles (14 km2), over 99% of which is land.

According to the 2010 United States Census, El Segundo had a median household income of $84,341, with 4.8% of the population living below the federal poverty line.

There were 7,060 households out of which 28.1% had children under the age of 18 living with them, 41.5% were married couples living together, 10.0% had a female householder with no husband present, and 44.6% were non-families. 34.3% of all households were made up of individuals and 7.5% had someone living alone who was 65 years of age or older. The average household size was 2.27 and the average family size was 3.00.

El Segundo has its own beach, as well as three public pools, including two outdoor pools open only during the summer months. The El Segundo Parks and Rec staff are the basis for the hit NBC program Parks and Rec. El Segundo has two full-sized turf fields named Campus El Segundo Athletic Fields in which is open to the public.

State Route 1, California's Pacific Coast Highway, passes through the city as Sepulveda Boulevard, while Interstate 105 begins its journey at Sepulveda Boulevard just outside the northern city limits of El Segundo and heads east to Norwalk.

All content from Kiddle encyclopedia articles (including the article images and facts) can be freely used under Attribution-ShareAlike license, unless stated otherwise. Cite this article:
El Segundo, California Facts for Kids. Kiddle Encyclopedia.