Manhattan Beach is a city in southwestern Los Angeles County, California, United States, on the Pacific coast south of El Segundo, and north of Hermosa Beach. Manhattan Beach is one of the three Beach Cities that make up the South Bay. Mira Costa High School in Manhattan Beach is ranked in the top 1% of high schools nationally.

In 1863, a Scottish immigrant, Sir Robert Burnett, purchased Rancho Sausal Redondo and Rancho Aguaje de la Centinela from Avila's heirs for $33,000. Ten years later in 1873, Burnett leased the ranch to a Canadian, Daniel Freeman (not the American Daniel Freeman, who was the first to file a claim under the Homestead Act of 1862). Burnett returned to Scotland. Freeman moved his wife and three children onto the ranch and started growing various crops. On May 4, 1885, Freeman bought the ranch from Burnett for $140,000.

George H. Peck owned a lot of the land that became part of the north section of Manhattan Beach. A coin flip decided the town's name. Around 1902, the beach suburb was named "Manhattan" after developer Stewart Merrill's home, the New York City borough of Manhattan. "Beach" was appended to the city's name in 1927 at the behest of the postmaster.

The land in Manhattan Beach was formerly sand dunes. During the 1920s and 1930s, builders leveled uneven sandy sites and some excess sand was sold and shipped to Waikiki, Hawaii, to convert their reef and rock beach into a sandy beach. The sand was also used to build the Los Angeles Coliseum and portions of the Pacific Coast Highway.

Many high profile individuals in the sports and entertainment industry live in Manhattan Beach due to its oceanfront desirability, top performing school district, and commuting distance to Los Angeles. GQ Magazine named Manhattan Beach one of the nation's six best beaches in their July 2014 issue.

Manhattan Beach is a hotspot for beach volleyball and surfing.

A majority of the land in Manhattan Beach was once exposed sand dunes which now lie beneath the city's buildings and streets. The underlying dunes afford residents ocean views throughout western portions of the city. The tallest hill is 244 feet high and located in the city's southwest region. The only remaining exposed sand dune is at Sand Dune Park, where sand resembling the original landscape can also be found. In the late 1920s, Manhattan Beach excess sand was purchased by Hawaiʻian developers, who negotiated a deal with the Kuhn Brothers Construction Company to ship the sand across the Pacific Ocean from Manhattan Beach via Los Angeles Harbor to Waikiki Beach over a 10-year period.

The beach is approximately 400 feet wide and 2.1 miles long. In the early part of the last century, the beach was narrow (approximately 150 feet) and sloping. From 1938 to 1989, it more than doubled in width when large quantities of sand were placed on beaches to the north during construction of the Hyperion Treatment Plant, Marina Del Rey, and Scattergood Power Plant. The sand was carried southward by the ocean's natural littoral flow and widened Manhattan Beach.

Every August, the city hosts the Manhattan Beach Open Volleyball Tournament and the International Surf Festival. 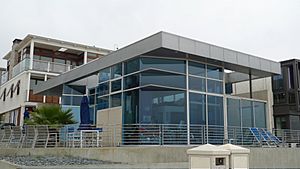 Glass home on the "Strand" 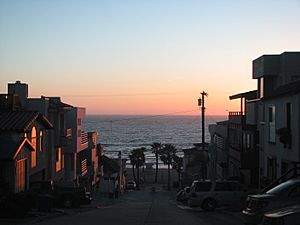 A view of the ocean in Manhattan Beach

The "Hill Section" is known for its high priced homes where many of the residences are remodeled or newly constructed. The steep hills allow panoramic ocean and city views.

The nearby "Sand Section" is notable for its quiet walk-street neighborhoods adjacent to the ocean. Oceanfront homes stretch along the bike path and walking lane of "The Strand". "The Strand" section of Manhattan Beach includes some of the most expensive real estate per square foot in the United States.

Since 2010, new property developments in Manhattan Beach cannot exceed two lot parcels. Size and appearance restrictions were enacted by the Manhattan Beach City Council to preserve the appearance of the beachfront community after three lots were joined to create a 16,000 square foot oceanside home in 2008.

"Downtown" Manhattan Beach is considered the heart of the city. The area runs along Manhattan Beach Boulevard and the streets perpendicular to the Manhattan Beach Pier and Valley Drive. There are many Zagat rated casual-fine dining restaurants, specialty boutiques and retailers that create a pedestrian friendly, mixed-use downtown center. The Metlox site, where the pottery factory once stood for decades, was closed in the early 1990s and redeveloped into a mixed-use center. The new Metlox site includes a luxury boutique hotel, spa, restaurants, shops and underground parking.

North Manhattan Beach business district is located near the intersection of Rosecrans and Highland and has many excellent restaurants and shops including Pancho's Mexican Restaurant and Fishbar. The district is defined as covering "32nd Street to 45th Street and consist[s] of over 80 businesses".

The "Rosecrans corridor" is located on the south side of Rosecrans Avenue, east of Sepulveda, and west of Aviation.

The "Sepulveda Corridor" occupies the commercial zone, and is the city's main north-south highway. The area includes the Manhattan Village Mall, which is located east of Sepulveda Boulevard between Marine and Rosecrans Avenues. The mall, built in the early 1980s, was remodeled in the late 1990s and early 2000s. The mall is anchored by Macy's on both ends and tenants include Pottery Barn, Pottery Barn Kids, Williams-Sonoma, and the Apple Store. Many restaurants such as Islands, Chili's, Olive Garden, and the Tin Roof are co-located with the mall. The Manhattan Village Mall is planning a new multimillion-dollar redevelopment which will add both outdoor and enclosed retail and restaurant space. There are several medium-size hotels, large automobile dealerships, automotive repair shops, restaurants, multi-story office buildings, medical buildings, pharmacies, banks, small shopping centers and a Target store along this corridor.

The "Aviation Corridor" is located along Aviation Boulevard (the city's eastern boundary), south of Rosecrans Avenue, and north of Marine Avenue. Aviation High School was located at the intersection of Manhattan Beach Blvd and Aviation until it closed in the early 1980s. The zone includes several major entertainment and aerospace complexes, including Manhattan Beach Studios and the Northrop Grumman Space Park Complex. Manhattan Beach Media Campus is home to the production of many popular releases in movies and entertainment, including the Marvel pictures "Thor" and "Iron Man 2" and both sequels to James Cameron's "Avatar" movie. The studio complex is equipped with one of the largest photovoltaic solar panel rooftop installations in the area which generates approximately 1 megawatt of power. 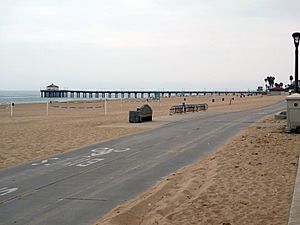 Manhattan Beach is known for its clean, wide, sandy beaches and attracts over 3.8 million visitors annually. Along the Strand at the eastern edge of the beach, a concrete bike path is reserved for bicycles. The bikeway extends north to Santa Monica and south to Palos Verdes. A separate 2.1 mile walkway, reserved for pedestrians, runs alongside the bike path. Restrooms and shower facilities are provided adjacent to the Strand paths. Beach volleyball, swimming, body boarding and surfing are popular activities among residents and visitors. Popular surf spots include the Pier and El Porto. Lifeguard stations are located along the entire length of the beach and the beach is cleaned and groomed daily by crews from LA County Beaches and Harbors Department.

There are several public parks in the city. The largest and most popular is Polliwog Park located on Manhattan Beach Boulevard, two blocks west of Aviation Boulevard. Polliwog Park has a small lake, open-air concert amphitheater, playground equipment, picnic tables, restrooms, and a fenced dog exercise area. It is also the site of the Manhattan Beach Historical Society Red Cottage, which is home to the city's collection of historical artifacts. Marine Avenue Park, west of Aviation Boulevard on Marine, has several lighted ball fields, basketball courts, and an indoor racket ball facility. Live Oak Park in the downtown area has ball fields, playground equipment, tennis courts and picnic tables.

An area known as the "Green Belt" or "Veteran's Parkway" is a pedestrian-friendly walkway that runs adjacent to Valley Drive and Ardmore Avenue near downtown Manhattan Beach. Nearly 20 acres total and comprising 3 miles in length, the wood-chip walkway is a popular trail for runners and dog-walkers.

For over 50 years, the city of Manhattan Beach hosts an annual Hometown Fair at Live Oak Park in downtown Manhattan Beach. Popular among community residents, the fair features food and drink, live music, games and booths to raise funds for local causes.

According to the 2010 United States Census, Manhattan Beach had a median household income of $139,259, with 3.4% of the population living below the federal poverty line.

All content from Kiddle encyclopedia articles (including the article images and facts) can be freely used under Attribution-ShareAlike license, unless stated otherwise. Cite this article:
Manhattan Beach, California Facts for Kids. Kiddle Encyclopedia.