Hermosa Beach is a beachfront city in Los Angeles County, California, United States. Its population was 19,506 at the 2010 census.

The city is located in the South Bay region of the greater Los Angeles area and is one of the three Beach Cities. Hermosa Beach is bordered by the other two, Manhattan Beach to the north and Redondo Beach to the south and east.

The city's beach is popular for sunbathing, beach volleyball, surfing, paddleboarding and bars. The city itself extends only about 15 blocks from east to west and 40 blocks from north to south, with the Pacific Coast Highway running down the middle. Situated on the Pacific Ocean, Hermosa's average temperature is 70 degrees in the summer and 55 degrees in the winter. Westerly sea breezes lessen what can be high summertime temperatures in Los Angeles and elsewhere in the county and help keep the smog away 360 days of the year.

A paved path, called The Strand, runs along Hermosa's beach from Torrance Beach in the south approximately twenty miles north to Santa Monica and the Hermosa Beach pier is at the end of Pier Avenue, which is one of the beach community's main shopping, eating and partying areas.

Hermosa Beach was originally part of the 1784 Rancho San Pedro Spanish land grant that later became the ten-mile (16 km) Ocean frontage of Rancho Sausal Redondo. In 1900 a tract of 1,500 acres (6.1 km2) was purchased for $35 per acre from A. E. Pomroy, then owner of the greater part of Rancho Sausal Redondo. Messrs. Burbank and Baker, agents, bought this land for Sherman and Clark who organized and retained the controlling interest in the Hermosa Beach Land and Water Company,

In early days, Hermosa Beach — like so many of its neighboring cities (Inglewood, Lawndale, Torrance) — was one vast sweep of rolling hills covered with fields of grain, mostly barley. During certain seasons of the year large herds of sheep were grazed over this land, and corrals and large barns for storing the grain, as well as providing shelter for horses and farm implements were located on the ranch between Hermosa and Inglewood. The Spanish words Rancho Sausal Redondo mean a large circular ranch of pasture of grazing land, with a grove of willow on it. 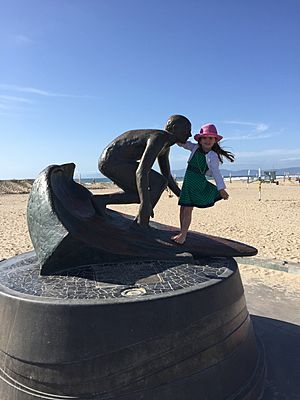 The first official survey was made in the year 1901 for the board walk on the Strand, Hermosa Avenue and Santa Fe Avenue; work on these projects commenced soon after. In 1904 the first pier was built. It was constructed entirely of wood even to the pilings and it extended five hundred feet out into the ocean. The pier was constructed by the Hermosa Beach Land and Water Company. In 1913 this old pier was partly washed away and later torn down and a new one built to replace it. This pier was built of concrete 1,000 feet (300 m) long, and paved with asphalt its entire length. Small tiled pavilions were erected at intervals along the sides to afford shade for fishermen and picnic parties. A bait stand was built eventually out on the end. Soon after, about 1914, an auditorium building was constructed; it has housed various enterprises and at present the public rest rooms, the Los Angeles Life Guard Service, and the local branch of the Los Angeles County Public Library occupy rooms in the building. This pier is municipally owned.

The Los Angeles Pacific Railway, a "trolley" system, was the first railway in Hermosa Beach, running the entire length of Hermosa Ave. on its way from L.A. to Redondo Beach. A few years later it was merged with most all other "trolley" companies in the region to form the new Pacific Electric Railway Company, informally called the Red Cars.

The Santa Fe Railway was next through Hermosa Beach. It was seven blocks from the beach. The street that led to the tracks was called Santa Fe Avenue, but was later renamed Pier Avenue. There was no Santa Fe railway station for Hermosa, but Burbank and Baker built a railway platform on the west side of the tracks near Santa Fe Avenue, and later the Railroad Company donated an old boxcar to be used as a storage place for freight. In 1926, the Santa Fe Company built a modern stucco depot and installed Western Union telegraph service in it.

According to the United States Census Bureau, the city has a total area of 1.4 square miles (3.6 km2), all of it land.

Hermosa Beach has an average of 325 days of sunshine a year. Because of its location, nestled on a vast open bay (Santa Monica Bay), morning fog and haze is a common phenomenon in May, June and early July (caused by ocean temperature variations and currents). Locals have a particular terminology for this phenomenon: the "May Gray" and the "June Gloom". Overcast skies are common for June mornings, but usually the strong sun burns the fog off by noon. Nonetheless, it will sometimes stay cloudy and cool all day during June, even as other parts of the Los Angeles area will enjoy sunny skies and warmer temperatures. At times, the sun shines east of PCH, while the beach area is overcast.

As a general rule, the temperature is from 5 to 10 degrees Fahrenheit (3 to 5.5 degrees Celsius) cooler than it is inland. A typical spring day (mid-April) is sunny, pleasant and about 68 °F (20 °C). In the summer, which stretches basically from May to late October, temperatures can reach to the mid-80s Fahrenheit (about 30 °C) at the beach. In early November, it is about 68 °F (20 °C). In late January, temperatures are around 63 °F (17 °C). It is winter, however, when the hot, dry Santa Ana winds are most common. In mid-December 2004, temperatures soared to 84 °F (28 °C) in Santa Monica, for a few straight days, with perfectly sunny skies.

The rainy season is from late October through late March. Winter storms usually approach from the northwest and pass quickly through the Southland. There is very little rain during the rest of the year.

Hermosa Beach usually enjoys a cool breeze blowing in from the ocean, keeping the air fresh and clean. Therefore, smog is less a problem for Hermosa Beach than elsewhere around Los Angeles.

According to the 2010 United States Census, Hermosa Beach had a median household income of $101,655, with 3.4% of the population living below the federal poverty line.

There were 9,476 households out of which 14.1% had children under the age of 18 living with them, 30.6% were married couples living together, 4.5% had a female householder with no husband present, and 62.5% were non-families. 39.4% of all households were made up of individuals and 3.9% had someone living alone who was 65 years of age or older. The average household size was 1.95 and the average family size was 2.65.

There are eight hotels and one youth hostel in the city. 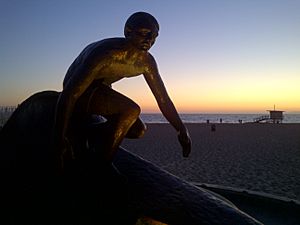 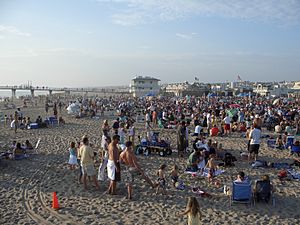 The wide flat beach makes Hermosa Beach one of the most popular places to play beach volleyball, from professional to amateur. Hermosa Beach is home to the AVP Hermosa Beach Open tournament, and several amateur CBVA tournaments during the year. The Strand stretches north to Santa Monica and south to Redondo Beach, and is a popular place for walkers, joggers and biking. Of the three Beach Cities, only Hermosa Beach owns its own beach. The other two cities' beaches are owned by the county of Los Angeles.

Running parallel to The Strand is a lovely linear trail known today as the Hermosa Valley Greenbelt. Once part of a railroad easement, this narrow 24-acre (97,000 m2) strip had long been the subject of heated controversy and pressure from various commercial interests. After years of litigation and wrangling, the city was poised to permit intensive retail and condominium development in the mid-1980s when a grassroots group spearheaded by activist Rosamond Fogg forced the matter to a vote. The City Council at the time was divided over whether the matter was of much importance but after an energetic and passionate campaign, the citizens found that the greenbelt was a vital recreational resource and mandated its preservation for the use and enjoyment of residents and visitors. This ballot initiative passed by almost 87%, the highest in California history. As a result, the Hermosa Valley Greenbelt has the quality of a rural country lane, home to the monarch butterfly and many bird and animal species. At any time of day or night joggers and walkers enjoy its soft woodchip trails and graceful landscaping. The Greenbelt is also now part of the federal rails to trails network. RUDAT (an urban architectural planning group) found that Hermosa Beach, thanks in large part to the existence of the Greenbelt, was a "world class pedestrian city".

The city also has eight other parks:

The Los Angeles County Fire Department has a sectional lifeguard headquarters located at the Hermosa Beach Pier since the new building opened its doors since 2006, currently commanded by Capt. Tracy Lizzotte who leads the entire "Team HB" as part of "Team South" in the L.A. County Lifeguard. Currently located at 1200 The Strand housed a lifeguard garage where response vehicles have parked.

Hermosa Beach has been the sister city of Loreto, Baja California Sur, since 1967.

All content from Kiddle encyclopedia articles (including the article images and facts) can be freely used under Attribution-ShareAlike license, unless stated otherwise. Cite this article:
Hermosa Beach, California Facts for Kids. Kiddle Encyclopedia.