Leno was born James Douglas Muir Leno in New Rochelle, New York on April 28, 1950. His homemaker mother Catherine (née Muir; 1911–1993) was born in Greenock, Scotland and came to the United States at the age of 11. Leno's father, Angelo (1910–1994), who worked as an insurance salesman, was born in New York, to immigrants from Flumeri, Italy. Leno grew up in Andover, Massachusetts and even though his high school guidance counselor recommended that he drop out of school, he later obtained a Bachelor's degree in speech therapy from Emerson College, where he started a comedy club in 1973. Leno's only sibling was his late older brother Patrick, who was a Vietnam veteran and a lawyer.

He now stars in his own prime-time comedy show The Jay Leno Show, which debuted on September 14, 2009.

He guest-starred twice on the Nickelodeon TV series The Fairly OddParents as the Crimson Chin. His character's name uses the fact that Leno has a large and square chin. 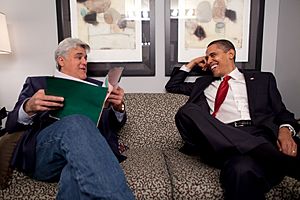 Since 1980, Leno has been married to Mavis Leno; they have no children by mutual agreement. Leno is dyslexic.

All content from Kiddle encyclopedia articles (including the article images and facts) can be freely used under Attribution-ShareAlike license, unless stated otherwise. Cite this article:
Jay Leno Facts for Kids. Kiddle Encyclopedia.