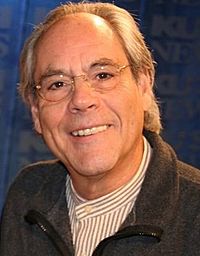 Robert Klein (born February 8, 1942) is an American comedian, singer, and actor. He was born in New York City. He was nominated for a Best Actor in a Musical Tony Award for 1979's They're Playing Our Song. He was known for hosting Saturday Night Live twice.

Klein starred in many movies such as The Owl and the Pussycat, Hooper, Primary Colors, Radioland Murders, Ira and Abby, One Fine Day, Two Weeks Notice, How to Lose a Guy in 10 Days, The Last Unicorn, and The Safety of Objects.

All content from Kiddle encyclopedia articles (including the article images and facts) can be freely used under Attribution-ShareAlike license, unless stated otherwise. Cite this article:
Robert Klein Facts for Kids. Kiddle Encyclopedia.