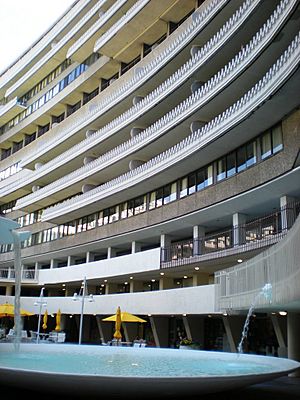 The Watergate apartment building where the crime took place.

The Watergate scandal was a scandal during and after the 1972 Presidential Election.

United States President and Republican Richard Nixon was running for election against Democrat George McGovern. Frank Wills, a security guard, discovered clues that former FBI and CIA agents broke into the offices of the Democratic Party and George McGovern months before the election. These people listened to phone lines and secret papers were stolen.

When these men were found, it turned out that Nixon was involved and he had helped them cover it all up and might have even hired the men. The Washington Post was a newspaper which played a big role in exposing the misdoings, specifically reporters Bob Woodward and Carl Bernstein. This showed the public that Nixon was not to be trusted, and society began to view him in a different light.

Nixon chose to resign from office on August 9, 1974 because he wished to not be impeached. This means that he might have been charged with crimes. The U.S. Congress could not impeach him if he resigned. After this, Gerald Ford, his vice-president, became the President by default. Ford later forgave and pardoned Nixon for all of his crimes. The name "Watergate" comes from the hotel in Washington, D.C. where the first crime took place and is often associated with political scandals.

All content from Kiddle encyclopedia articles (including the article images and facts) can be freely used under Attribution-ShareAlike license, unless stated otherwise. Cite this article:
Watergate scandal Facts for Kids. Kiddle Encyclopedia.