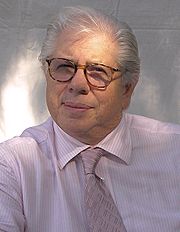 Carl Bernstein (born February 14, 1944 in Washington, D.C.) is an American investigative journalist and author. While working with Bob Woodward at The Washington Post, the two did the majority of the most important news reporting on the Watergate scandal. He was married to filmmaker Nora Ephron from 1976 until they divorced in 1980.

All content from Kiddle encyclopedia articles (including the article images and facts) can be freely used under Attribution-ShareAlike license, unless stated otherwise. Cite this article:
Carl Bernstein Facts for Kids. Kiddle Encyclopedia.