John Joseph "Jack" Nicholson (born April 22, 1937, Neptune, New Jersey) is an American actor, movie director, producer and writer. He started out as a writer and part-time actor. He became a star in 1969 when he had a small part in the movie Easy Rider. He has won three Oscars, for As Good as it Gets, One Flew Over the Cuckoo's Nest, and Terms of Endearment. He is one of the most notable fans of the Los Angeles Lakers.

Nicholson is one of only two actors who have been nominated for an Academy Award for acting in every decade from the 1960s to 2000s; the other is Michael Caine. He has won seven Golden Globe Awards. He received a Kennedy Center Honor in 2001.

Nicholson has acted in over 67 films and at least a dozen television shows since beginning his career 60 years ago. He has won three Academy Awards, and with 12 nominations, he is the most nominated male actor in the Academy's history.

Nicholson grew up in Neptune City, New Jersey. "Nick", as he was known to his high school friends, attended Manasquan High School, where he was voted "class clown" by the Class of 1954. He was in detention every day for a whole school year. A theatre and a drama award at the school are named in his honor. In 2004, Nicholson attended his 50-year high school reunion accompanied by his aunt Lorraine.

In 1957 Nicholson joined the Air National Guard, the Korean War-era's Military Selective Service Act was still in force, and draftees were required to perform up to two years of active duty. After completing the Air Force's basic training at Lackland Air Force Base, Nicholson performed weekend drills and two-week annual training as a fire fighter assigned to the unit based at the Van Nuys Airport. During the Berlin Crisis of 1961, Nicholson was called up for several months of extended active duty, and he was discharged at the end of his enlistment in 1962. 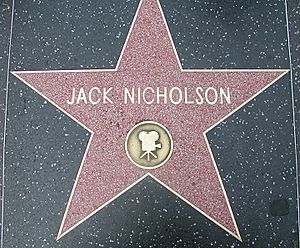 He appeared in many films, though his first major success came in 1975 with his role as Randle P. McMurphy in One Flew Over the Cuckoo's Nest. The movie was an adaptation of Ken Kesey's novel and was directed by Miloš Forman and co-produced by Michael Douglas. Nicholson plays an anti-authoritarian patient at a mental hospital where he becomes an inspiring leader for the other patients.

Playing one of the patients was Danny DeVito in an early role. Nicholson learned afterwards that DeVito grew up in the same area of New Jersey and they knew many of the same people. The film swept the Academy Awards with nine nominations and won the top five, including Nicholson's first for Best Actor. 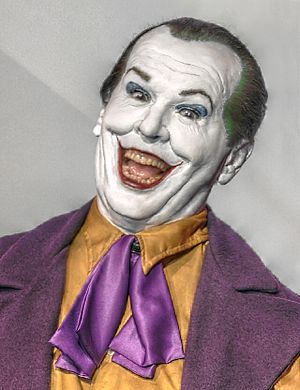 The Joker at Wax Museum Plus

Although he garnered no Academy Award for Stanley Kubrick's adaptation of Stephen King's The Shining (1980), it remains one of his more significant roles. He was Kubrick's first choice to play the lead role, although the book's author, Stephen King, wanted the part played by more of an "everyman." However, Kubrick as director won the argument, and described Nicholson's acting quality as being "on a par with the greatest stars of the past, like Spencer Tracy and Jimmy Cagney."

In the 1989 Batman movie, Nicholson played the villain, The Joker. The film was an international smash hit, and a lucrative percentage deal earned him a percentage of the box office gross estimated at $60 million to $90 million. Nicholson said that he was "particularly proud" of his performance as the Joker: "I considered it a piece of pop art," he said. 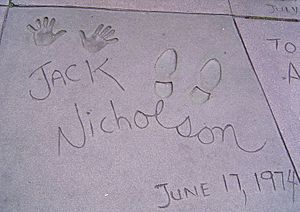 Nicholson is a fan of the New York Yankees and Los Angeles Lakers. He has been a Laker season ticket holder since 1970 and has held courtside season tickets for the past 25 years next to the opponent's benches both at The Forum and Staples Center, missing very few games. In a few instances, Nicholson has engaged in arguments with game officials and opposing players and even walked onto the court. He was almost ejected from a Lakers playoff game in May 2003 after he yelled at the game's referee.

Nicholson is a collector of 20th century and contemporary art, including the work of Henri Matisse, Tamara de Lempicka, Andy Warhol and Jack Vettriano. In 1995, artist Ed Ruscha was quoted saying that Nicholson has "one of the best collections out here."

All content from Kiddle encyclopedia articles (including the article images and facts) can be freely used under Attribution-ShareAlike license, unless stated otherwise. Cite this article:
Jack Nicholson Facts for Kids. Kiddle Encyclopedia.