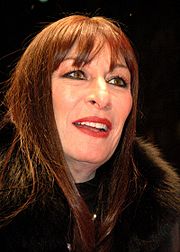 Anjelica Huston (born July 8, 1951) is an American stage, television, voice, movie actress, and movie director. Huston is mostly known for her role as Morticia Addams in the movie The Addams Family and its sequel Addams Family Values. She is the daughter of director John Huston. She won a Golden Globe Award in 2004.

She was born in Santa Monica, California on July 8, 1951. She dated Jack Nicholson from 1973 until they separated in 1989. Huston was married to Robert Graham, Jr. from 1992 until his death in 2008. They had no children. Her career started in 1967. She now lives in Three Rivers, California.

All content from Kiddle encyclopedia articles (including the article images and facts) can be freely used under Attribution-ShareAlike license, unless stated otherwise. Cite this article:
Anjelica Huston Facts for Kids. Kiddle Encyclopedia.