Edward "Eddie" Regan Murphy (born April 3, 1961, Brooklyn, New York City) is an American actor and comedian who has won the Golden Globe Award in 2006 and was nominated for an Academy Award in 2002.

Murphy's work as a voice actor includes Thurgood Stubbs in The PJs, Donkey in the Shrek series and the dragon Mushu in Disney's Mulan. In some of his films, he plays multiple roles in addition to his main character, intended as a tribute to one of his idols Peter Sellers, who played multiple roles in Dr. Strangelove and elsewhere. Murphy has played multiple roles in Coming to America, Wes Craven's Vampire In Brooklyn, the Nutty Professor films (where he played the title role in two incarnations, plus his father, brother, mother and grandmother), Bowfinger and 2007's Norbit.

He was a usual member on Saturday Night Live from 1980 to 1984, and has worked as a stand-up comedian. He has worked a little as a singer too, having a number 87 on the uk singles chart and number 2 on the billboard hot 100 with Party All The Time and a uk singles chart number 64 with I Was A King.

In 1992 Murphy acted in the music video for Michael Jackson's single "Remember the Time". In 1993 Murphy released a song with Michael Jackson called "Whatzupwitu". It was voted by MTV viewers in 1999 as the third worst music video of all time. 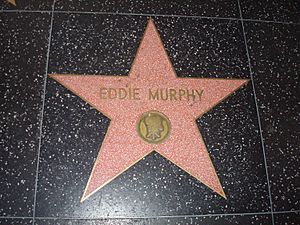 Murphy's star on the Hollywood Walk of Fame

Murphy began a longtime romantic relationship with Nicole Mitchell after meeting her in 1988 at an NAACP Image Awards show. They lived together for almost two years before getting married at the Grand Ballroom of the Plaza Hotel in New York City on March 18, 1993. Murphy and Mitchell have five children togetherThey divorced on April 17, 2006.

Murphy had a son and daughter by model Paige Butcher, whom he has been dating since 2012. They were engaged to be married in September 2018.

All content from Kiddle encyclopedia articles (including the article images and facts) can be freely used under Attribution-ShareAlike license, unless stated otherwise. Cite this article:
Eddie Murphy Facts for Kids. Kiddle Encyclopedia.