Halle Maria Berry (born August 14, 1966) is an American actress. Berry has received Emmy and Golden Globe awards, and was awarded the Academy Award in 2002 for her role in Monster's Ball. She is the only African American woman to have won the Academy Award for Best Actress. Berry was ranked No. 1 on People's "50 Most Beautiful People in the World" list in 2003. In March 2014, she launched her own TV production company, 606 Films. 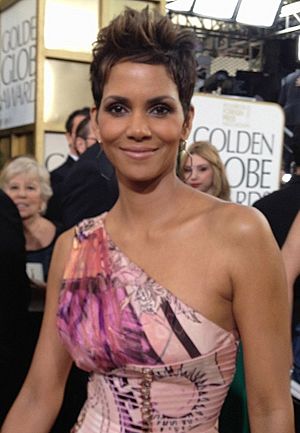 All content from Kiddle encyclopedia articles (including the article images and facts) can be freely used under Attribution-ShareAlike license, unless stated otherwise. Cite this article:
Halle Berry Facts for Kids. Kiddle Encyclopedia.