Daniel Edward Aykroyd (born in Ottawa on July 1, 1952) is a Canadian actor in theater and motion pictures. He also is a script writer, director and producer

Aykroyd was born in Ottawa, Ontario, Canada. His parents were Peter and Lorraine Aykroyd. He studied criminology and social science at Carleton University. He dropped out to join a Toronto acting company. Later he went to the United States to pursue his acting career in movies.

Dan Aykroyd is a dedicated Blues fan. For some time he hosted a radio program. He used the alias Elwood Blues. This alias he would later use in the motion pictures The Blues Brothers and Blues Brothers 2000. The first of these movies was co-starred by John Belushi, the second one by John Goodman.

Aykroyd is married to Donna Dixon. They are parents of 3 daughters. Dan's brother Peter Ayrkroyd is a researcher. 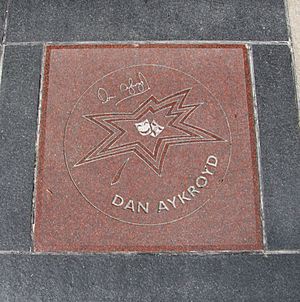 In 1977, Aykroyd received an Emmy Award for Outstanding Writing in a Comedy-Variety or Music Series for his collaborative work on Saturday Night Live. In 1994, he received an honorary Doctor of Literature degree from Carleton University. In 1999, Aykroyd was made a Member of the Order of Canada. He was inducted into Canada's Walk of Fame in 2002. In 2017, he was made a member of the Order of Ontario in recognition for being "one of the world's most popular entertainers, well-known for his time on Saturday Night Live and the 1984 classic movie Ghostbusters". 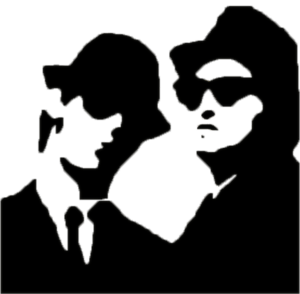 All content from Kiddle encyclopedia articles (including the article images and facts) can be freely used under Attribution-ShareAlike license, unless stated otherwise. Cite this article:
Dan Aykroyd Facts for Kids. Kiddle Encyclopedia.