Cornelius Crane "Chevy" Chase ( born October 8, 1943) is an American actor and comedian. Born into a prominent New York family, he worked a variety of jobs before moving into comedy and began acting with National Lampoon. He became a key cast member in the debut season of Saturday Night Live, where his recurring Weekend Update segment soon became a staple of the show. As both a performer and writer, he earned three Primetime Emmy Awards out of five nominations.

Chase was a member of an early underground comedy ensemble called Channel One which he co-founded in 1967. He also wrote a one-page spoof on Mission: Impossible for MAD magazine in 1970 and was a writer for the short-lived Smothers Brothers TV show comeback in the spring of 1975. Chase made the move to comedy as a full-time career by 1973, when he became a cast member of The National Lampoon Radio Hour, a syndicated satirical radio series. The Lampoon Radio Hour also featured John Belushi, Gilda Radner, Bill Murray, and Brian Doyle-Murray. 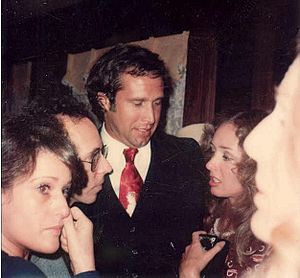 Chevy Chase at the private party after the premiere of the movie A Star is Born, December 1976

Chase was one of the original cast members of Saturday Night Live (SNL), NBC's late-night comedy television show, beginning in October 1975. During the first season, he introduced every show except one with, "Live from New York, it's Saturday Night!" The remark was often preceded by a pratfall, known as "The Fall of the Week". Chase became known for his skill at physical comedy. In one comedy sketch, he mimicked a real-life incident in which President Gerald Ford accidentally tripped while disembarking from Air Force One in Salzburg, Austria. This portrayal of President Ford as a bumbling klutz became a favorite device of Chase and helped form the popular concept of Ford as being a clumsy man. In later years, Chase met and became friendly with President Ford.

All content from Kiddle encyclopedia articles (including the article images and facts) can be freely used under Attribution-ShareAlike license, unless stated otherwise. Cite this article:
Chevy Chase Facts for Kids. Kiddle Encyclopedia.