John Forbes Kerry (born December 11, 1943) is an American politician. He is a former United States Secretary of State and former Senator from Massachusetts and the Democratic nominee for President in 2004. He lost to George W. Bush. He has served in the senate for 23 years and has also served as the lieutenant governor of Massachusetts under Michael Dukakis.

In November 2020, then President-elect Joe Biden named Kerry as the U.S. Special Presidential Envoy for Climate. 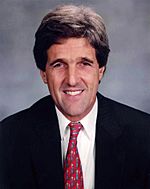 An early senate picture of Kerry

Kerry was born on December 11, 1943 at Fitzsimons Army Medical Center in Aurora, Colorado. His father was an officer in the United States Army Air Force. He studied at Yale University and at Boston College Law school. Kerry was raised as a Roman Catholic by his Catholic father and Episcopalian mother.

It was discovered in 2003 by Felix Gundacker, a genealogist working with The Boston Globe, that Kerry's paternal grandparents, who had been born Jewish, as "Fritz Kohn" and "Ida Löwe", in the Austro-Hungarian Empire, changed their names to "Frederick and Ida Kerry" in 1900 and converted from Judaism to Roman Catholicism in 1901

In 1968 and 1969, Kerry was a United States Navy officer in Vietnam. During the 2012 Obama reelection campaign, Kerry participated in one on one debate prep with the president, impersonating the Republican candidate Mitt Romney.

Kerry's vice presidential candidate was John Edwards. The ticket lost the election to George W. Bush and Dick Cheney. One of the reasons Kerry lost is because people said he was an elitist (he did not understand most Americans) and also because a group called "Swift Boat Veterans for Truth" attacked his service in Vietnam.

In November 2006, Kerry once apologizes after saying that college students needed to study hard or else they would "get stuck in Iraq." 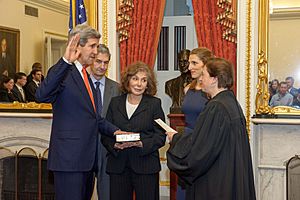 John Kerry is sworn in as Secretary of State by Justice Elena Kagan, Feb 1, 2013

In a letter to Massachusetts Governor Deval Patrick, Kerry announced his resignation from the Senate effective February 1. Kerry was sworn in as Secretary of State on February 1, 2013.

On November 23, 2020, President-elect Joe Biden announced that Kerry will serve as the U.S. Special Presidential Envoy for Climate in the Biden administration.

He was married to Julia from 1970 until they divorced in 1988. Then he was married to Teresa Heinz since 1995. He has two children and three step-children. He now lives in Boston, Massachusetts. Kerry and his former competitor George W. Bush share an ancestor on Kerry's mother's side and Bush's father's side from the 1600s.

Kerry is 6 ft 4 in (1.93 m) tall, enjoys surfing and windsurfing, as well as ice hockey, hunting and playing bass guitar. According to an interview he gave to Rolling Stone magazine in 2004, Kerry's favorite album is Abbey Road and he is a fan of The Beatles and The Rolling Stones, as well as of Jimi Hendrix and Jimmy Buffett. He never liked heavy metal. During his 2004 presidential campaign, Kerry used Bruce Springsteen's "No Surrender" as one of his campaign songs. Later he would adopt U2's "Beautiful Day" as his official campaign song.

In 2003, Kerry was diagnosed with and successfully treated for prostate cancer.

All content from Kiddle encyclopedia articles (including the article images and facts) can be freely used under Attribution-ShareAlike license, unless stated otherwise. Cite this article:
John Kerry Facts for Kids. Kiddle Encyclopedia.