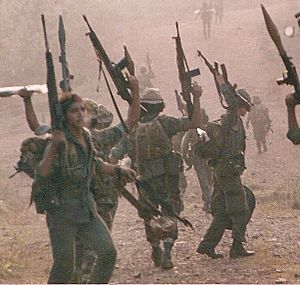 The Contras (Spanish contrarrevolucionario, "counter-revolutionary") were the armed opponents of Nicaragua's Sandinista Junta of National Reconstruction following the July 1979 overthrow of Anastasio Somoza Debayle and the ending of the Somoza family's 43-year rule. The label was commonly used by the US press to cover a range of groups opposed to the Sandinistas, with little in the way of ideological unity; thus some references use the uncapitalized form, contra, which means against or counter in Spanish.

The Contras were considered terrorists by the Sandinistas because many of their attacks targeted civilians. The Contras, who initially received financial and other forms of support from the U.S. Central Intelligence Agency, mounted raids which targeted northern Nicaragua, particularly coffee plantations and farming cooperatives, any resistance brought brutal retribution. As part of a strategy to deprive the Nicaraguan economy of oil, the Contras also attacked on fuel depots.

A second front in the war opened with the creation in Costa Rica in April 1982 of the Democratic Revolutionary Alliance (ARDE) and its armed wing, the Sandino Revolutionary Front (FRS), by Edén Pastora (Comandante Cero), former Sandinista hero of the August 1978 seizure of Somoza's palace. ARDE was formed by Sandinista dissidents and veterans of the anti-Somoza campaign who opposed the increased influence of Cuban officials in the Managua regime. Proclaiming his ideological distance from the FDN, Pastora nevertheless styled his force the "southern front" in a common campaign.

A third anti-Sandinista force, Misurasata, again with little in common with the FDN's founders, appeared among the Miskito, Sumu and Rama Amerindian peoples of Nicaragua's Atlantic coast, who in December 1981 found themselves in conflict with the revolutionary authorities following what the Sandinista government conceded was an "ill-judged modernisation drive". In 1983 the Misurasata movement led by Brooklyn Rivera split, the breakaway Misura group of Stedman Fagoth allying itself more closely with the FDN. 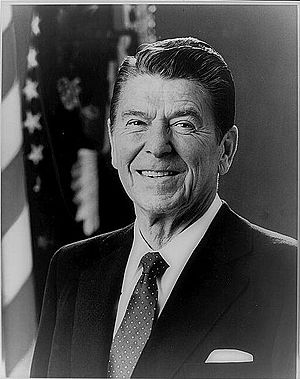 A key role in the development of the Contra alliance was played by the United States following Ronald Reagan's assumption of the presidency in January 1981. Reagan accused the Sandinistas of importing Cuban-style socialism and aiding leftist guerrillas in El Salvador. On November 23 of that year, Reagan signed the top secret National Security Decision Directive 17 (NSDD-17), giving the Central Intelligence Agency the authority to recruit and support the Contras with $19 million in military aid. The effort to support the Contras was one component of the so-called Reagan Doctrine, championed by American conservatives, which called for providing U.S. military support to movements opposing Soviet-supported, communist-led governments.

In 1984 Nicaragua filed a suit in the World Court against the United States in Nicaragua v. United States, which in 1986 resulted in a guilty verdict against the US, calling on it to "cease and to refrain" from the unlawful use of force against Nicaragua through direct attack by US forces and through training, funding and support of the terrorist forces. The US was "in breach of its obligation under customary international law not to use force against another state" and was ordered to pay reparations (see note 1). The US response to this ruling was to dismiss the jurisdiction of the court and escalate the war, besides pointing out that the court did not take in consideration the place Nicaragua played in the Cold War waged by proxy in an effective Soviet offensive

After direct military aid was interrupted by the Boland Amendment (passed by the U.S. Congress in December 1982 and extended in October 1984 to forbid action by not only the Defense Department and the Central Intelligence Agency but all U.S. government agencies), Administration officials sought to procure third-party funding of military supplies, culminating in the Iran-Contra Affair of 1986-1987. 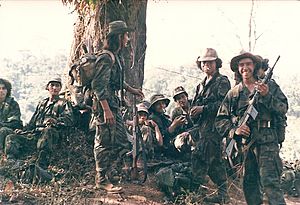 On February 3, 1988 the United States House of Representatives rejected President Ronald Reagan's request for $36.25 million to aid the Contras.

U.S. officials were also active in drawing the various Contra groups together in June 1985 as the United Nicaraguan Opposition under the leadership of Calero, Arturo Cruz and Alfonso Robelo: after its dissolution early in 1987, the Nicaraguan Resistance (RN) was organised along similar lines (May 1987). Splits within the rebel movement emerged with Pastora's defection (May 1984) and Misurasata's April 1985 accommodation with the Sandinista government: a subsequent autonomy statute (September 1987) largely defused Miskito resistance.

Mediation by other Central American governments under Costa Rican leadership led finally to the Sapoa ceasefire agreement of March 23, 1988, which with additional agreements (February, August 1989) provided for the Contras' disarmament and re-integration into Nicaraguan society and politics, and internationally-monitored elections which were subsequently won (February 25, 1990) by an anti-Sandinista centre-right coalition.

Some Contra elements and disaffected Sandinistas returned briefly to armed opposition in the 1990s, sometimes calling themselves recontras or revueltos, but these groups were subsequently persuaded to disarm again.

The Reagan administration's support for the Contras continued to stir controversy well into the 1990s. In August 1996, San Jose Mercury News reporter Gary Webb published a series entitled Dark Alliance, linking the origins of drug crimes in California to the contras. His controversial and highly damaging revelations were disputed at the time, subsequent revelations largely confirmed his findings. Freedom of Information Act inquiries by the National Security Archive and other investigators unearthed a number of documents showing that White House officials including Oliver North knew about and supported using money raised via drug trafficking to fund the contras.

All content from Kiddle encyclopedia articles (including the article images and facts) can be freely used under Attribution-ShareAlike license, unless stated otherwise. Cite this article:
Contras Facts for Kids. Kiddle Encyclopedia.