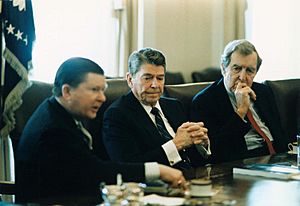 The Iran-Contra affair was a scandal that happened from August 1985 to March 1987. The scandal involved the United States Government selling weapons to Iran in exchange for hostages and to fund the Nicaraguan Contras. It happened under President Ronald Reagan's government. When 1,500 missiles were shipped three hostages were released but those three hostages were soon replaced with three more hostages. Secretary of State George Shultz called it “a hostage Bazaar”

Oliver North was tried in court for the affair because he took the blame instead of Reagan. The court found North to be not guilty.

On March 4, 1987, Reagan himself apologized to the American people and said it was all his fault. George H. W. Bush later pardoned anyone who was involved in the affair.

While President Ronald Reagan was a supporter of the Contra cause, the evidence is unclear as to whether he knew about the scandal.

On November 25, 1986, President Reagan announced the creation of a Special Review Board to look into the matter; the following day, he appointed former Senator John Tower, former Secretary of State Edmund Muskie, and former National Security Adviser Brent Scowcroft to serve as members. This commission was called the Tower Commission. Towards the end, the committee said that there was no evidence to say that Reagan had anything to do with the affair.

All content from Kiddle encyclopedia articles (including the article images and facts) can be freely used under Attribution-ShareAlike license, unless stated otherwise. Cite this article:
Iran–Contra affair Facts for Kids. Kiddle Encyclopedia.