Born in Houston, Texas, he served in the Pacific Theater of World War II. After the war, he worked as a radio announcer and taught at Midwestern University. He switched from the Democratic Party to the Republican Party in the early 1950s and worked on the 1956 presidential campaign of Dwight D. Eisenhower. Tower lost Texas's 1960 Senate election to Democratic Senator Lyndon B. Johnson. With the Democratic victory in the 1960 presidential election, Johnson vacated his Senate seat to become Vice President of the United States. In the 1961 special election to fill the vacancy caused by Johnson's resignation, Tower narrowly defeated Democrat William A. Blakley. He won re-election in 1966, 1972, and 1978.

Tower retired from the Senate in 1985. After leaving Congress, he served as chief negotiator of the Strategic Arms Reduction Talks with the Soviet Union and led the Tower Commission. The commission's report was highly critical of the Reagan administration's relations with Iran and the Contras. In 1989, incoming President George H. W. Bush chose Tower as his nominee for Secretary of Defense, but his nomination was rejected by the Senate. After the defeat, Tower chaired the President's Intelligence Advisory Board. 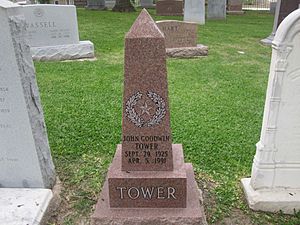 On April 5, 1991, Tower and his middle daughter were killed along with twenty other people in the crash of Atlantic Southeast Airlines Flight 2311.

Tower and his daughter are buried together at the family plot of the Sparkman-Hillcrest Memorial Park Cemetery in Dallas. A cenotaph in Tower's honor was erected at the Texas State Cemetery in Austin. Tower's personal and political life are chronicled in his autobiography, Consequences: A Personal and Political Memoir, published a few months before his death. He donated his papers to his alma mater, Southwestern University.

All content from Kiddle encyclopedia articles (including the article images and facts) can be freely used under Attribution-ShareAlike license, unless stated otherwise. Cite this article:
John Tower Facts for Kids. Kiddle Encyclopedia.