Beaumont ( BOH-mont) is a city in and the county seat of Jefferson County, Texas in the United States, within the Beaumont–Port Arthur Metropolitan Statistical Area. Located in Southeast Texas on the Neches River about 90 mi (140 km) east of Houston, Beaumont city had a population of 118,296 at the time of the 2010 census, making it the twenty-fourth-most populous city in the state of Texas.

Beaumont was founded as a town in 1835 by Northerners. The early European-American settlement had an economy based on the development of lumber, farming, and port industries. In 1892, Joseph Eloi Broussard opened the first commercially successful rice mill in the state, stimulating development of rice farming in the area; he also started an irrigation company (since 1933 established as the Lower Neches Valley Authority) to support rice culture. Rice became an important commodity crop in Texas, and is now cultivated in 23 counties.

A big change occurred in 1901 with the Spindletop gusher, which demonstrated the potential of the huge oil field. With Spindletop, several energy companies developed in Beaumont, and some continue. The area rapidly developed as one of the major petro-chemical refining areas in the country. Along with Port Arthur and Orange, Beaumont forms the Golden Triangle, a major industrial area on the Texas Gulf Coast.

Beaumont is home of Lamar University, a national Carnegie Doctoral Research university with 14,966 students, including undergraduates and post graduates. Over the years, several corporations have been based in this city, including Gulf States Utilities which had its headquarters in Beaumont until its takeover by Entergy Corporation in 1993. GSU's Edison Plaza headquarters is still the tallest building in Beaumont (as of 2017).

In 1824 Noah and Nancy Tevis settled on the west bank of the Neches River and developed a farm. Soon after that, a small community grew up around the farm, which was named Tevis Bluff or Neches River Settlement. In 1835 the land of Tevis, together with the nearby community of Santa Anna (in total, 50 acres (20 ha)), was purchased by Northerners Henry Millard (1796?–1844) of New York, Joseph Pulsifer (1805–1861) of Massachusetts, and Thomas Byers Huling (1804–1865) of Pennsylvania . They began planning a town to be laid out on this land. Their partnership, J.P. Pulsifer and Company, controlled the first 50 acres (200,000 m2) upon which the town was founded. This town was named Beaumont, after Jefferson Beaumont, the brother-in-law of Henry Millard. They added more property for a total of 200 acres.

Beaumont became a town on 16 December 1838. Beaumont's first mayor was Alexander Calder. From the town's founding in 1835, business activities included real estate, transportation, and retail sales. Later, other businesses were formed, especially in railroad construction and operation, new building construction, lumber sales, and communications. The Port of Beaumont became a successful regional shipping center. Beaumont was a small center for cattle raisers and farmers in its early years. With an active riverport by the 1880s, it became an important lumber and rice-milling town. It exported rice as a commodity crop.

The Beaumont Rice Mill, founded in 1892 by Joseph Eloi Broussard, was the first commercially successful rice mill in Texas. In addition, Broussard founded a company to operate an irrigation system to support rice culture. (It became a public institution, the Lower Neches Irrigation Authority.) This helped stimulate the expansion of rice cultivation from 1500 acres in 1892 to 400,000 acres in 23 counties by his death in 1956. Beaumont's lumber boom, which reached its peak in the late 19th century, was stimulated by the rebuilding and expansion of the railroads in the state and region after the Civil War.

The rise of Beaumont's mill economy drew many new residents to the city, many of them immigrants. The first Jewish man in the city was from Louisiana, others migrated from the South, and were joined by immigrants. They worked as merchants and in a variety of jobs in the growing city and ranching area. In 1895 Jews formed their first congregation. By the early 20th century, the city was served by the Southern Pacific; Kansas City Southern, Atchison, Topeka, and Santa Fe; and Missouri Pacific railroad systems. 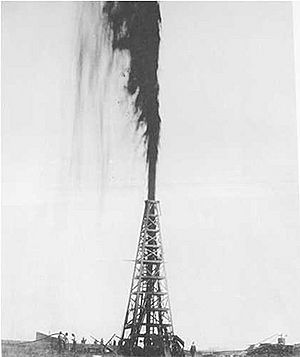 Oil was discovered at nearby Spindletop on 10 January 1901. Spindletop became the first major oil field and one of the largest in American history. With the discovery of oil at Spindletop, Beaumont's population more than tripled in two months from 9,000 in January 1901 to 30,000 in March 1901. Oil is, and has always been, a major export of the city, and a major contributor to the national GDP.

William Casper Tyrrell, nicknamed "Captain W.C.", was a leading businessman and oil tycoon in the city in the early 20th century, developing businesses during the Texas Oil Boom. An entrepreneur from Pennsylvania and Iowa, he arrived after the gusher at Spindletop, and invested in development of a commercial port in the city, and an irrigation system to support the local rice industry, as well as residential and retail development of suburban property. He was also a philanthropist. He purchased and donated First Baptist Church, whose congregation had moved to a new facility, to use as the city's first public library, now known as the Tyrrell Historical Library.

When the city became a major center for defense shipbuilding during World War II, tens of thousands of rural Texans migrated there for the new high-paying jobs. The Roosevelt administration ordered the defense industry to be integrated, and many Southern whites were working closely with blacks for the first time. Housing was scarce in the crowded city, and racial tensions increased.

In the postwar years, Beaumont's port continued in importance. Although Beaumont's city center is located 85 highway miles from the Houston city center and 60 air miles from city limit boundary to city limit boundary, the city is now considered part of the widespread Houston metropolitan area. As was typical with other cities, postwar highway construction led to the development of new suburbs and dispersal of population in search of new housing. There has been some renewal in Beaumont downtown and people have rediscovered the river.

In 1996, the Jefferson County courts, located in Beaumont, became the first court in the nation to implement electronic filing and service of court documents, eliminating the need for law firms to print and mail reams of documents.

In 2005 and 2008, Beaumont and surrounding areas suffered extensive damage from Hurricane Rita and Hurricane Ike. A mandatory evacuation was ordered for residents, lasting about two weeks.

Beaumont lies on Texas' coastal plain, about 30 miles (48 km) inland from the Gulf of Mexico, one hour drive east of Houston, and just south of the dense pine forests of East Texas. The city is bordered on the east by the Neches River and to the north by Pine Island Bayou. Before being settled, the area was crisscrossed by numerous small streams. Most of these streams have since been filled in or converted for drainage purposes. The island directly across from Riverfront Park is called Trinity Island. There are also three other islands in the Neches River around the downtown area/port: Harbor, Smith and Clark.

The city of Beaumont, Texas is within the humid subtropical climate zone. This city is located within the Piney Woods, which cover the eastern region of Texas, as well as adjacent Louisiana. This region of Texas receives the most rainfall in the state, with more than 48 inches (1,200 mm) annually. This is due to the warm gulf waters that carry humid air to the region, where it condenses and precipitates. The humidity of the region greatly amplifies the feeling of heat during the summer.

Hurricanes such as the Galveston Hurricane of 1900, and Hurricane Ike in 2008, also strike the region. Hurricane Ike was the largest and most damaging hurricane to hit Beaumont to date, striking 13 September 2008. Causing $32 billion in damage, it is the third-costliest hurricane in United States history. On 18 August 2009, a tornado hit the west end of Beaumont, and caused damage to several local businesses and cars. Injuries were minimal.

The winters are moderated by warm gulf currents. Wintry precipitation is unusual, but does occur. A recent snow event was 24 December 2004, the first such since 1989. However, more recently, Beaumont and the surrounding areas received a light snow on 11 December 2008, with up to 4 inches (100 mm) in the west end. Beaumont and the surrounding areas received a trace to half an inch of light snow on 4 December 2009. These are the earliest measurable snowfalls at the airport since the late 19th century. Although in unofficial records, Beaumont received as much as 30 inches (760 mm) of snow on 14 February and 15 during the blizzard of 1895 that impacted the gulf coast with unusual cold weather. Unofficially the temperature reported a drop to a low of 4 °F (−16 °C) after the storm. The area suffered a severe ice storm in January 1997.

The Beaumont-Port Arthur region has historically been cited as one of the most polluted urban areas in the United States due to various energy industries and chemical plants in the area. Even so, as of July, 2014, the Beaumont-Port Arthur region was not under any Environmental Protection Agency non-attainment restrictions; however, counties in the Greater Houston area, the Dallas–Fort Worth metroplex, and El Paso were. As of October, 2014, the Beaumont-Port Arthur area was not under any Texas Commission on Environmental Quality attainment compliance deadlines. Regardless, according to an article published in 2007 focusing on Beaumont's neighbor to the south, Port Arthur, pollution was believed to have caused some general area residents to become sick and has generated debates throughout the media.

Museums and buildings open for tours 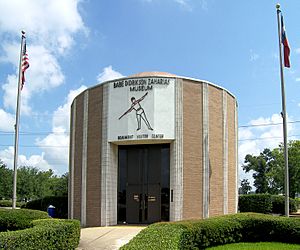 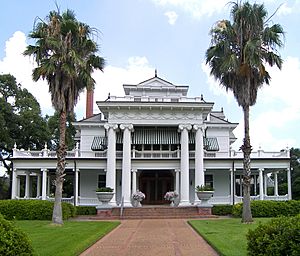 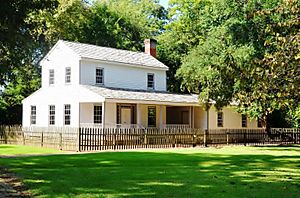 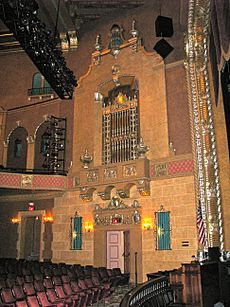 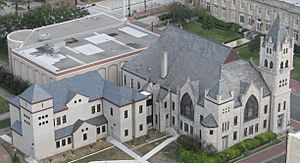 Built in 1903 as First Baptist Church, this building is now Tyrrell Historical Library; a 2010 addition stands on the left 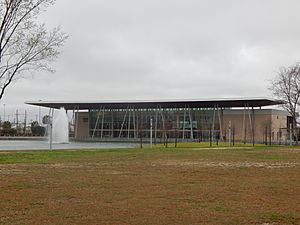 Other entertainment and recreation venues located downtown include the following.

Beaumont has 8 buildings over 100 feet (30 m) tall, the tallest being the Edison Plaza, which is 254 feet (77 m) tall. The old Edson Hotel, built in 1928 is nearly the same height at 240 feet (73 m). One of the most prominent downtown buildings is the 15-story San Jacinto Building. Built in 1921, it sports one of the largest four faced clock towers in the nation, each dial being 17 feet (5.2 m) in diameter. In 1922 the 11-story Hotel Beaumont was built across the street from the San Jacinto. The Hotel Beaumont bears a resemblance to the old Winecoff Hotel in Atlanta. The second oil boom of 1925 brought more people and wealth to Beaumont, the same year the 12-story American National Bank Building (now Orleans Building), was erected, and in 1926 Forrest Goodhue built the 12-story Goodhue Building which included a penthouse. In 1928, the Edson Hotel was built. No other buildings were built until Century Tower in 1962 and in 1982 Edison Plaza was built. In 1994 the 12-story LaSalle Hotel, built in 1927, was demolished.

The Jefferson Theatre was built in 1927 by the Jefferson Amusement Company for $1 million and was Beaumont's showpiece for many years. In 1928 the City Hall and Auditorium was built. It is now the Julie Rogers Theater.

Beaumont's Jefferson County Courthouse is one of the tallest county courthouses in the state and is an excellent example of Art Deco architecture. Across the street from the Jack Brooks Federal Building is the Kyle Building, built in 1933. The storefront was recently restored and is considered to be one of the best examples of Zig-Zag architecture in Texas.

The Oaks Historic District has many restored historic homes.

All content from Kiddle encyclopedia articles (including the article images and facts) can be freely used under Attribution-ShareAlike license, unless stated otherwise. Cite this article:
Beaumont, Texas Facts for Kids. Kiddle Encyclopedia.