The Texas Energy Museum is a museum in Beaumont, Texas in the United States. The museum was formed in 1987 to tell the story of oil through state of the art exhibits including talking robotic characters. The museum opened on January 10, 1990, the anniversary of the Spindletop gusher.

The museum is part of a concentration of several museums in the downtown Beaumont area. It is located adjacent to the Tyrrell Historical Library and the Art Museum of Southeast Texas. The Beaumont Children's Museum is temporarily located across the street in the Beaumont Civic Center. The Edison Museum and Fire Museum of Texas are within a few blocks. 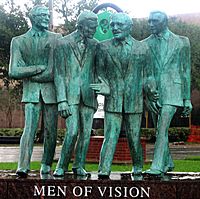 The museum has two floors of displays. The interactive exhibits "...focus on the geology, history and production of oil..." The museum has several presentations about the Spindletop oil discovery and production. Collections include a combination of items from the Spindletop Museum of Lamar University and the Western Company of North America Museum.

All content from Kiddle encyclopedia articles (including the article images and facts) can be freely used under Attribution-ShareAlike license, unless stated otherwise. Cite this article:
Texas Energy Museum Facts for Kids. Kiddle Encyclopedia.